Shakespeare’s ‘Hamlet’ staged in SVG as part of world tour 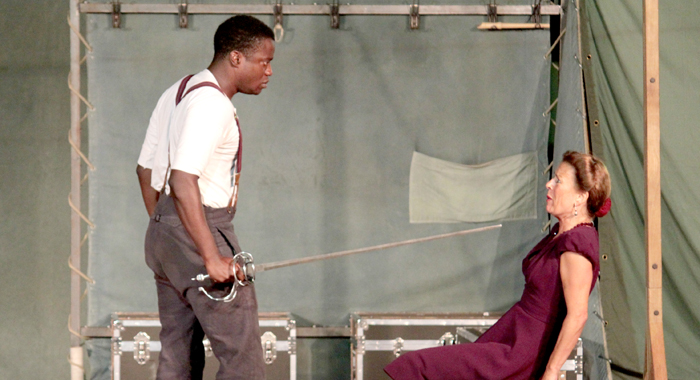 A scene from “Hamlet”, as staged at the Community College. (IWN photo)

Hundreds of persons Friday night attended a free staging of Shakespeare’s “Hamlet”, the play that gave the world the famous quotations, “To be, or not to be: that is the question.” and “Something is rotten in the state of Denmark.”

A company from Globe Theatre staged the play at the St. Vincent and the Grenadines Community College campus in Villa, as part of the Hamlet Globe to Globe tour.

This completely unprecedented theatrical adventure will see Hamlet tour to every single country on earth. Sixteen extraordinary men and women will travel across the seven continents, performing in a huge range of unique and atmospheric venues, the website for the tour said.

SVG was the 46th country in which the play was performed.

Among the persons who saw the play Friday night was retired educator,

Annelle Thomas, who used to teach the play to Sixth Form students.

“I think it was very good show, and I think people in drama here can learn a lot about stage setting and movement, and moving between scene. Everything flowed smoothly, there weren’t any breaks and lapses in between,” Thomas told I-Witness News after the show.

Thomas said that in addition to reading the play, she has seen it on television, but it was the first time she was seeing it live.

“I think seeing it on stage here tonight brings what you have read in the book and what you have seen, more to life — more with it. You are closer to the actors and actresses. You see and feel the whole flow of the play, much more clearly,” she told I-Witness News.

Carrie Burnham, a stage manager for the touring company, said her group was “really excited, because, obviously, we are doing the different Caribbean islands.

“It’s a very different location,” she said of the amphitheatre at the College where the play was staged.

“… this is a very different space, because it is a school, which is already really unique.  But it was really great when we built the set today to have all the kids around, because they were really interested and it makes much difference having that kind of enthusiasm,” she said.

She said the production Friday night was “brilliant”.

“We were a bit unsure at first because it (the location) is so different. It felt really nice; I think the acts are happy with the performance this evening,” she said.

Meanwhile, Nigel Scott, deputy director of the Community College, said he is pleased that the play was staged at the institution.

Scott said he had never read or seen the play before and was “quite impressed”.

“I was a little concerned about the accents and the Shakespearean language, but I think generally the audience, while they may not have followed everything, I think they truly appreciated it, and it was good drama,” he said.