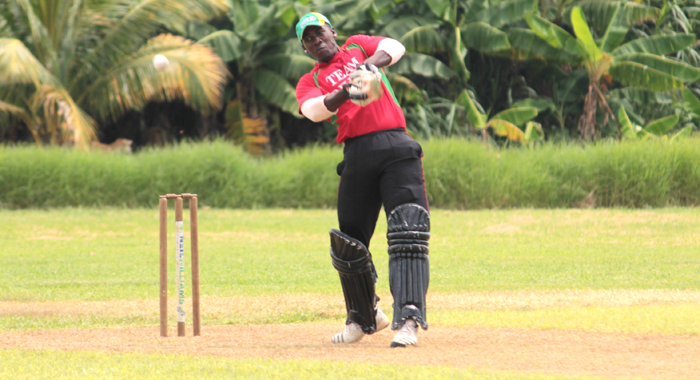 Defending champions, Team Rivals moved closer to being part of the Super40 “Rumble in the De Country” competition when they advanced to the semi-finals with an emphatic 115-run victory over Guardian General Saints at Sion Hill Playing Field on Sunday.

Team Rivals, who were asked to take first knock, got what turned out to be a match-winning total on an underprepared pitch, through their batsmen chipping in with important, though not big, scores.

They were set on their way through an opening stand of 51 between Asif Hooper (35) and guest player Darren Greaves (21), before Hooper was magnificently caught by a diving Jeron John at point as he attempted to cut Desron Maloney. He struck 4 sixes and faced 40 balls. Without addition to the score, Hyron Shallow (0) was well taken at slip by Romel Currency from one that jumped off a good length.

Gidron Pope (7) was then stumped by Sunil Ambris to make it 70/3, and 5 runs later, Greaves was trapped LBW by Ray Charles with one that stayed down — a feature of the wicket all day.

Marvin Small (12) and Casmond Walters (40) then added 29 for the fifth wicket, before Small, attempting to cut Currency, was caught at the wicket. Walters continued to hit the ball cleanly and counted 2 fours and 3 sixes before skying Rolando Wright to Vincent Cupid Jr. at midoff.

Maloney 3/27 off eight and Kenroy Peters 2/24 off eight were the best of the Guardian General Saints bowlers.

Set to score at an achievable 4.5 runs an over, Guardian General Saints suffered early setback when they lost both openers, Rickford Walker (3) and Omron Lorraine (7), by the time the score reached 15. Walker was LBW by Walters with total on 4 and Lorraine was bowled playing back to one that kept low. Maloney (11) and Sunil Ambris (18) tried to steady the ship before Maloney lost patience and top-edged to extra cover.

Team Rivals then struck a telling blow when the experienced Currency (5) was bowled by Butler’s left-arm spin with one that passed under his prodding bat to make it 49/4.

There was little resistance after, with Ambris holding out to point off an attempted slog and the team then losing their last 6 wickets for 19 runs in 10.2 overs.

Earlier, umpires Ivan “Eddie” Williams and Colbert “Nuggie” McDonald were put into action in having the 30-yard circle marked as no such preparation was done. In addition, players expressed concern about the surface, which appeared not to have been adequately prepared for national cricket. The wicket, on being uncovered, displayed long, partly green grass stemming from possibly a prolonged period under the covers.

President of the SVG Cricket Association Kishore Shallow has indicated to I-Witness News that his organisation will be writing the manager of the National Sports Council, Cecil Charles within the next few days to register their disappointment at what took place at both the Arnos Vale and Sion Hill Playing Fields at the weekend.

The Super40 competition continues next Saturday at Park Hill with semi-final action, and ends on Sunday with the finals, at the same venue.