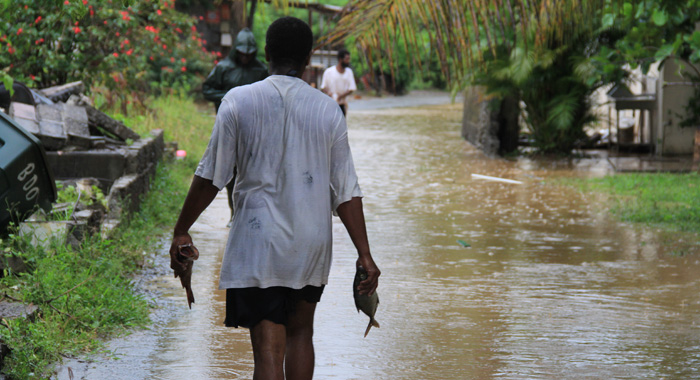 A fisherman walks through a flooded street in Buccament Bay on Sept. 6. (IWN photo)

Some residents of Buccament Bay and their parliament representative have disagreed about whether river defence erected by Buccament Bay Resort on that side of the river contributes to flooding of the Central Leeward Community.

The homes of some residents, the Buccament Bay Seventh-day Adventist Primary School, and at least one business place were flooded when a low-level trough system brought torrential rains on Sept. 6.

It was the second time in eight months that the area was flooding, the first being during the Christmas Eve disaster last year.

“First of all, when they were doing the Buccament project over there, they diverted the river, and the fence that they put over there, it causing all the problems, it forcing the water over on the river side,” Renrick Quashie told I-Witness News as he surveyed the damage to his property.

Quashie is modifying his concrete house after the December floods, and, in the meantime, he, his wife and their daughter live with his mother, while he is using his house, located in the same compound, to store some of his belongings.

“What they need to do right now is to start doing the gabion basket so that people could be at peace. I mean, this is the second disaster in eight months. What next?” he said.

Among the things that Quashie lost during the most recent flood was the stove that the government gave him after the December disaster.

The appliance is still in plastic, and was among the belongings that Quashie had stored in his house.

He said that when he realised that the river would overflow its banks, he began moving the stuff, but the water rose too quickly, and took with it building materials and other items.

But Member of Parliament for Central Leeward, Maxwell Charles, a Buccament Bay resident, said flooding has always been a reality of life in the coastal community.

“There was always flooding on this side of the resort, but I can’t say it is worse because of that, but, indeed, we are very much prone to flooding,” Charles, who was assessing the damage, told I-Witness News.

“Not to this extent. Me live here since me small and all kind of river come down, me never see this,” interjected Jeffrey O’Garro, owner of Buccament Bay Bungalow, a business that was also flooded.

“The river used to dey ah go over tha’ side dey more. All this nah use to dey a go on,” another man commented.

“Who ever see such magnitude a water ah come over ya?” Quashie asked.

Charles said the flooding resulted from “the intensity of the rain.

“But, again, it was not as bad as last time (December 2013), because we (the government) have indeed done some work on the river — its depth, its width and we have the stones at the side. But, it seems as though it’s something we will have to live with as the years come and go,” he further told I-Witness News.

O’Garro showed I-Witness News his brother’s house, and O’Garro’s own business place, both of which we flooded.

“This never used to normally happen. It’s since they build the resort over their side we getting these floods on a regular basis,” he told I-Witness News.

“I’ve been here since a little boy. This constant flooding happens because of the resort protecting their side of the river; … so this is the way we lose everything, and it is unfair when you hear officials come and say this normally happens in Buccament [when] they know better.

“… Yes, you used to have your little off and on flood, minor thing, but since they (the resort) protect their side, it push the water on this side now,” said O’Garro who reopened his business about five months ago, following the December floods.

Meanwhile, I-Witness News was unsuccessful in its repeated attempts to get a comment from Buccament Bay Resort, having been told that the manager was not in.

At the time of publishing this article, the manager did not return our calls.