Owner of house that collapsed complained about shaking 2 months earlier 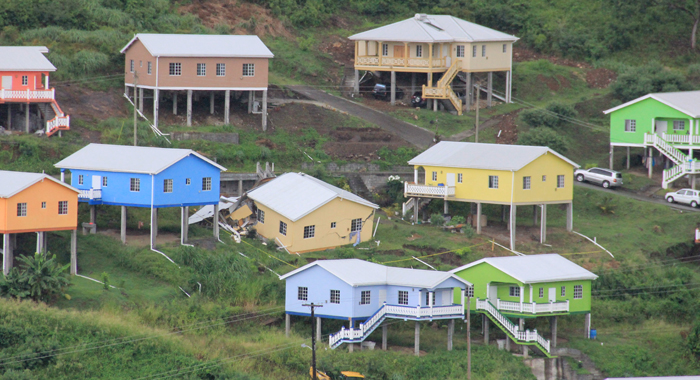 The owner of the house that collapsed in Clare Valley on Friday had reported to the Housing and Land Development Corporation (HLDC) that the house had been shaking two months earlier.

It was built about two and a half years ago as part of the Unity Labour Party government’s affordable housing initiative.
A resident of the South Leeward community, which has low- and middle-income houses, told I-Witness News that the columns under the house bowed before the house collapsed.

The homeowner, physician Katisha Douglas, told reporters on Saturday that two months ago she thought she was experiencing an earthquake.

“I was asleep with my daughter in my room and I felt some shaking and I was saying, ‘Is this an earthquake?’” she told journalists.

“So the next morning I listened to the news to see if there was an earthquake. I asked some friends and they said no…” she said, adding that she had felt the house shake more than once.

Douglas said that she noticed a crack in the house on Sept. 7 as she attempted to latch an open door to a column, as she often does. (Torrential rains triggered floods and landslides in some parts of St. Vincent on Sept. 6),

”… when I looked I saw a big crack. One of the ballisters was pulling away from the wall. I snapped the photo, showed a couple persons and I said this is strange,” Douglas said.

Douglas went to the HLDC on Sept. 8 and 9 to report about cracks that she observed in the house, including between the patio and the rest of the structure.

“When we had this rain now (on Friday), I actually was scared. I shifted stuff from the middle room to a third room and me and daughter slept in that room,” Douglas said, adding that she was uneasy all night.

There was heavy rain in St. Vincent and the Grenadines on Friday “associated with the interaction of a tropical wave and a trough system”, and forecasters said flash floods could occur as soils were already saturated.

Meanwhile, General Manager of the HLDC, Elvis Charles, told reporters separately on Saturday that he would like “to sympathise with the owner of this house.

“Last week, she came to my office and I got to know her, because she was just talking about general things that she may want us at HLDC to assist her with, and I did promise her that we will come to her aid or any homeowner in Clare Valley what they want at this time,” he said.

Charles said the collapse of the house is “a very unfortunate situation.

“I have never seen this before,” he said, and speculated that there must have been some shifting in the soil, adding that this is not a fault of HLDC’s.

“We always try to maintain strict building codes. In fact, our engineers and our STO (Senior Technical Officer) Mr. Fidel Rose, he is a young person, but someone who has experience in building and   is very knowledgeable; he always asks for the assistance of (Chief Engineer) Mr. Brent Bailey…” Charles further said of Rose, a civil engineer.

“And what we intend to do, we are going to use this as an example to all of us, every builder in St. Vincent and the Grenadines,” Charles said.

He noted that the HLDC is building more houses in Green Hill under the government’s housing initiative.

Asked to respond to comments that the house collapse because of poor construction, Charles said:

“I wouldn’t really go down that route.”

He said HLDC’s engineers will conduct an assessment. “We are going to look at their work, look at what they present then try to come up our own conclusions,” Charles said.

But he said Douglas was not the only homeowner who had complained that their houses had been shaking.

“A few people have come to HLDC and have spoken about shaking in houses. I remember when we got those reports, we asked for the assistance of the Cuban engineers and we did a geo-tech study here and it was found that many of the complains of persons were not really sound.

“I am not saying that some may not have cause to be a little alarmed, but the study that we have clearly shows that there was really nothing to worry about. What I can say, we are human beings. If one of us is to complain about a particular situation, sometimes, it has a domino effect. Others will say it is happening to me too…” said Charles, a former teacher who become head of the HLDC just about a year ago, after the death of engineer Morris Slater.

But homeowners have also complained about the lack of drainage for rainwater from their roofs.

“I am going to speak with the officials of the HLDC … We are going to look into all of that, to see whether the persons who have complained have basis for complaining,” Charles said.