Royal Navy honours Vincentian sailor for being among the best 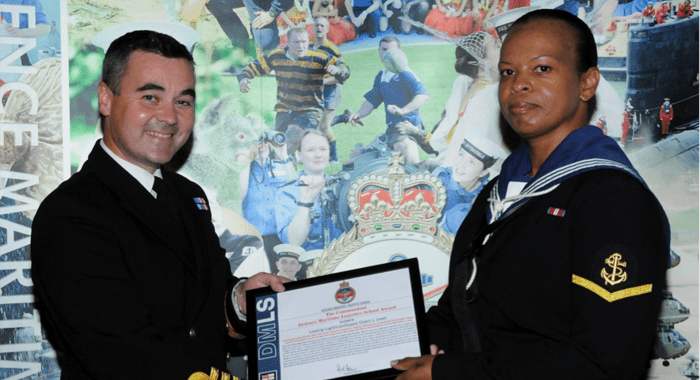 Every year the Defence Maritime Logistics School holds an award ceremony at HMS RALEIGH to celebrate the achievements of students and staff over the previous training year. This is a prestigious event attended by VIPs from both Navy Command and the wider training environment. The senior guest this year was Vice Admiral Steel, Chief Naval Logistics Officer, 2SL (2nd Sea Lord).

Among the 34 people who received awards was Leading Logistician Supply Chain Lovita Lewis, a Vincentian.

Lewis, who originally is from Queen’s Drive, St. Vincent and the Grenadines and resides in Gosport, Hampshire, England, joined the Royal Navy, in 2007.

She was presented with the Commandant Defence Maritime Logistics School Award as the student who demonstrated the most dynamic command, leadership and management awareness and application during all facets of her training within DMLS and her participation in the life of HMS RALEIGH as a whole.

This award is recognition of exceptional zeal and drive to succeed, and took place at HMS RALEIGH, England on July 24, 2014.

Lewis is a former student of the Girls’ High School and St. Vincent Technical College and worked in administration at CLICO International Life Insurance prior to joining the Royal Navy.