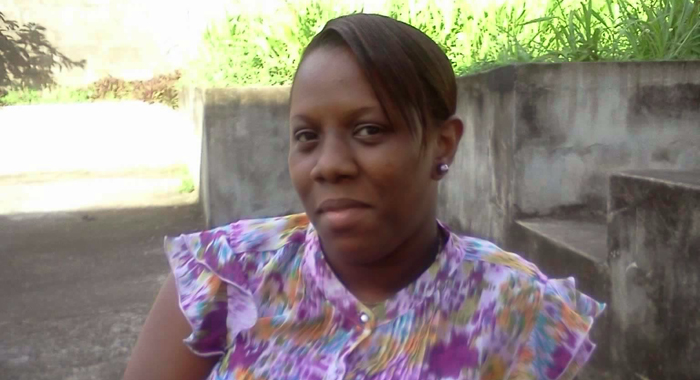 Dr. Katisha Douglas, the owner of the house that collapsed. (Internet photo)

Katisha Douglas, the physician whose house collapsed in Clare Valley on Saturday, says that God saved her that day.

Douglas, who lived in the three-bedroom house with her daughter, told reporters on Saturday that she should have been at home when the house collapsed shortly after 4 p.m.

She said she went into Kingstown all day, and usually pick up her daughter from school then head home.

But she went to the bakery that day, and when she got to the St. Vincent Brewery Ltd in Campden Park, less than a mile away from her house, Douglas, who was driving, received a call from her neighbour that the house was moving.

“She said she knows I am driving, but don’t panic. I stopped my car. I said, ‘Oh My God, this thing is really happening’. Because I was actually scared of the heavy rains and all of that from last Saturday (Sept.6) floods,” Douglas said.

There was torrential rain in St. Vincent last Friday.

Douglas said that as she continued on her way home, she gave someone a ride.

“And the time I hit the hill over there and I saw [the house], I broke down; the guy took the wheel. I couldn’t even drive. I arrive here around 4:30 and the house was down,” Douglas told reporters.

Douglas was scared that the house would have collapsed, having complained more than once to the Housing and Land Development Corporation, the state-agency that built the houses, that the house was shaking.

The house, built two and half years ago, was among those in Clare Valley that the government built under its Low- and Middle-Income Housing initiative.

Douglas reiterated that normally she would be at home at the time when the house collapsed.

She said she had told her daughter that they would have had a movie night last Friday.

“I know God is with me. The devil, he is a liar and I was saved here today,” Douglas said, adding that at one point her daughter was rushing her to go home, but she delayed.

“And I said not yet. I just sat, thinking all things then eventually [we left],” Douglas told reporters.

“I actually was shaken up yesterday, [but I am] trying to be strong,” she said in the interview on Saturday.

“Last night (Friday night) is when everything came down on me; I had headaches. I actually have a headache right now. I am trying to be strong. My daughter jumped out of her sleep last night. She cried a lot yesterday. I know it is devastating for her. I was scared,” Douglas said.

She said she no longer wants to at the Clare Valley housing project site.

She, however, added, “I am strong, I went through a lot in life already; God is good, but — I am still praying about everything and God will direct.”

Douglas noted that the house could have collapsed during the night when it was actually raining, rather than Friday afternoon after the rains stopped.

“We might have been in the house hustling out for our lives,” she said.

Prime Minister Ralph Gonsalves said on Monday that a preliminary assessment has found that the house collapsed as a result of poor engineering, poor drainage, and the type of soil in the area.

He said his government will conduct a thorough assessment of the entire area and will pay for all remedial work.

5 replies on “Owner of collapsed house says God saved her”