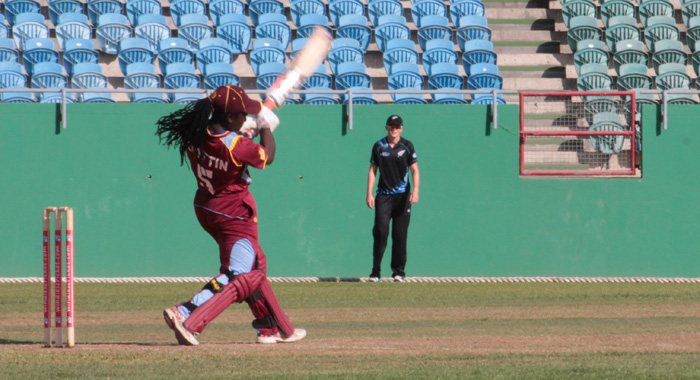 Mercurial all-rounder Deandra Dottin turned in another of her now customary top draw performances to motor the West Indies senior women’s cricketers team to an impressive 7-wicket victory over New Zealand’s “White Fern” in the second T20 match to level the series in front of an impressive crowd at the Arnos Vale Playing Field on Thursday.

Dottin made her impression on the match with the ball as she grabbed 3 wickets when New Zealand looked as if they would run away with the match and the series.

She then returned with the bat to hit an unbeaten 43 to see her team overcome some early hiccups and seal the win.

Player of the Match Dottin, who went to the crease at the fall of the first wicket, with the score on 10/1, gave an air of confidence from ball one and batted with that assurance right through her innings, combining attack with intelligent picking out the gaps for ones and twos.

An ultra-attacking player, the diminutive Dottin had to curb that instinct in the first part of her innings after the loss of champion batsman, Stafanie Taylor (5) with the score on 12 and later Britney Cooper (12) at 44/3.

But Dottin, who struck 4 fours in her 42-ball innings, found a useful partner in Shemaine Campbell (29*) who shared a 61-run unbroken fourth wicket partnership.

Campbell batted confidently as well and struck 1 four and a big six over wide long on in her 31-ball stay at the crease.

The West Indies suffered a few nervy moments in the early part of their innings with the loss of both openers with the total just out of double figures.

Kycia Knight (5) was bowled by Holly Huddlestone, when she attempting a big heave to the legside with the score on 10, and two runs later, Taylor was taken low down by Suzie Bates at mid-off attempting to hit Morna Nelsen over the top. Britney Cooper, who added 32 for the third wicket with Dottin, hit a catch to Huddlestone at mid-off from the bowling of Sophie Devine.

It was then left to Dottin and Campbell to give the supportive crowd something to shout about when Dottin pulled Bates to the midwicket boundary from the first ball of the 18th over.

Earlier, New Zealand who were asked to take first knock upon losing the toss, looked in control after rushing to 23/0 at the end of the second over, as openers Suzie Bates (29) and Rachel Priest (31) capitalised on wayward bowling by Shamila Connell whose two overs went for 19 runs.

The pair saw the total to 50 in the eighth over before being separated in unfortunate circumstances.

Priest drove seamer Shakera Selman powerfully down the pitch and the ball ricochet from the bowler’s hand unto the stump with Bates out her ground. The New Zealanders, despite this setback, marched along at over 6 runs an over, with Priest and Devine (8) pushing the score along with little risk.

It was then that the irrepressible Dottin made her entry with the ball by hitting the legstump of Devine after she had moved too far inside to exploit the spaces on the legside, then trapping Sara Mc Glashan (2) LBW at 70/3.

Dottin then caused even more misery for the visitors when she bowled Priest as the batsman sought to go over the in-field with overs running out and the scoring rate at a snail’s pace.

Dottin, who was adjudged Player of the match by fomer West Indies seamer Phernel Charles, finished with figures of 4/1/9/3 and received good support from Selam who took 1/14 from her four overs and Shanel Daley who despite not taking a wicket conceded juts 16 runs from her four overs.