Some Clare Valley housing project tile workers to be blacklisted 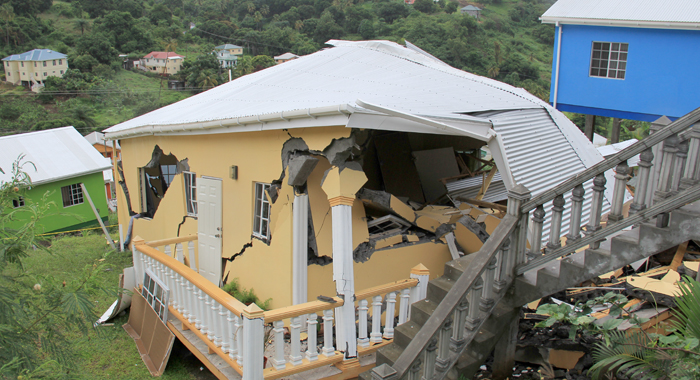 Eustace has raised questions about the safety and value of the houses. (IWN photo)

Minister of State in the Ministry of Works, Sen. Julian Francis says that tile workers who did substandard work on the Clare Valley Housing project, where a house collapsed last month, will be blacklisted.

Among homeowners’ complaints that have become public since the collapse of a house in the government’s housing scheme , is the problem of tiles “popping” off floors, and falling off bathroom walls.

“I went into [a homeowner’s house] and when he showed me his tiles, I called Beresford immediately. I said, Beresford, please get me the list of all the tile workers who work on Clare Valley. Those who did not give us proper workmanship will be blacklisted. Because I cannot take these tile men and put them to repair your house, because the same thing will happen,” Francis, who was Minister of Housing when most of the houses were built, said, recounting a conversation with chair of the Housing and Land Development Corporation (HLDC), Beresford Phillips.

“I hear a lady say when she tap she hear it hollow. Once you hear a tile hollow, they ain’t put it in properly, it have air space under it,” Francis told a meeting of homeowners and HLDC officials last weekend

Francis said he did some of the tiling in his house, and told homeowners there is an old secret in tiling: “soak your tiles before you put it down; wet the tiles.

“And put the thin set on the tiles too and even it out and tap it out so that you tap out the air under it. That is what is happening with a lot of these tiles.”

Homeowners have complained that their house are shaking, and one homeowner told I-Witness News that the tiles in both bedrooms in her house came up one night after the houses was shaking.

Francis said told the meeting that engineers will say that if a house moves sufficiently, it will cause the tiles to come loose.

He said that he has lived in his house in Penniston since 2000, and

six months ago all the tiles on the laundry came up, although he didn’t feel the house shake.

“But I want to assure you that not necessarily because your bathroom tiles fall off, that your house is going to fall down. I really want you — I know it is easy to talk these things, but I share your feelings about the fear you have,” Francis said.

Francis asked the media “to be softer on your (homeowners’) minds, don’t play with your minds, don’t blame the government for every opportunity you get.

“Yes, Housing and Land Development Corporation must take some licks for it, because they would have put in the infrastructure. But we will be putting in the infrastructure, even though it is late,” Francis said, in reference to drains and other infrastructure that were not constructed at the project before the houses were built.

Homeowners at the meeting detailed the many problems they have with their houses.