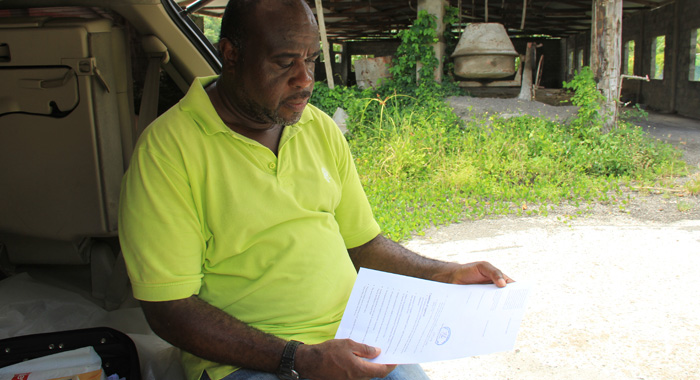 State officials signed, last Thursday, Oct. 2, what turned out to be one of the best birthday gifts that businessman Leon “Bigger Bigs” Samuel could have ever hoped for.

But it would be another 24 hours or so before the businessman would be informed that his licence to mine aggregate at Rabacca has been reinstated, almost four years after it was suspended.

And even as the the green light has once again been turned on, it will take another six months or so before Vincentians can again purchase the high-strength concrete bricks that Bigger Trucking and Block Construction Co. was famous for.

The Unity Labour Party government in Feb. 2011 suspended the mining licence, citing adverse environmental impact and violation of the terms of the agreement.

Some persons have argued that the move was a political backlash against Samuel’s alleged opposition to the government in the 2010 elections campaign.

Samuel said that the move forced the closure of his block-making plant, since his business plan did not anticipate purchasing aggregate.

Since the closure, there has been extensive vandalism of the property at Rabacca, where thieves have removed vital parts of the crushing plants and have stripped the electricity generation unit of all of its wire.

But Samuel is happy that he has obtained a licence again.

“I felt really good. First to begin, I thanked God and then I went towards the church,” Samuel told I-Witness News of his reaction when he received the licence around noon on Friday.

“I prayed over them in my vehicle, and then I took them right to the Roman Catholic Church, because I really wanted to offer them up before the Lord. I wanted the priest to do so. When I got there, they were having midday service … and I participated in the service then I gave them the documents to offer up to the Lord on my behalf,” he said.

Samuel believes that recent comments by the Catholic clergy about social justice, which mentioned him specifically, contributed to the government’s decision to reinstate the licence.

“From there, I took them to the office of my attorney and then I made contact with the other persons who I know were with me, battling with me. I went on Facebook and personally inbox all the persons I know who were there with me in the struggle, and some by phone call,” he further told I-Witness News of his reaction after receiving the licence.

Samuel said he slept “a little easier” Friday night. “… although I know it is a far way off to get back where we were as a company and as an organisation, but at least we can see the light at the end of the tunnel at this time,” he said.

“It’s the first time in a long time I feel I can spend a weekend with my family and we can talk and try to have a conversation as a family.”

Samuel has said that the government had paid the previous owner of the land to allow government vehicles to pass through the land, after a river crossing on the public road was destroyed by extreme weather.

He said he blocked the road years after the government discontinued the payment.

“… to be honest with you, [it] is the one I have concerns about,” he said of the clause that mentions the access road.

“…instead of just saying ‘The access road must remain open’, I would have preferred to see them continue and say ‘for a period not exceeding…’ I prefer for us to have a cut off. For me, it is a little open ended,” Samuel told I-Witness News, adding that he, his lawyer, and his technical team will be meeting with Chief Engineer, Brent Bailey to discuss the clause.

The new licence also says that Samuel must install caution signs saying that the embankment is unstable, a stipulation that he said is “reasonable — no problem at all”.

There were also questions about how much land Samuel owns at Rabacca. He had purchased five acres of land, but, as the river shifted, the land size increased to 12 acres, in keeping with the law.

“This was the epidemic of the contention, with the issue of road and land size,” Samuel told I-Witness News, adding that the phrasing of the licence seems to accept that the land is, in fact, legally his.

“Because, if you see how it was spelt out here in clause number one, that means your boundaries still remain where they are; it hasn’t changed,” he said.

Samuel said he does not want to quote an exact figure but anticipated net income loss while his licence was suspended to be millions of dollars.

“I am not in a position to say, because I don’t want to put a figure out there, but what I can say [is] it is a lot, a lot of money. When I say a lot, I mean a lot — millions well,” he told I-Witness News.