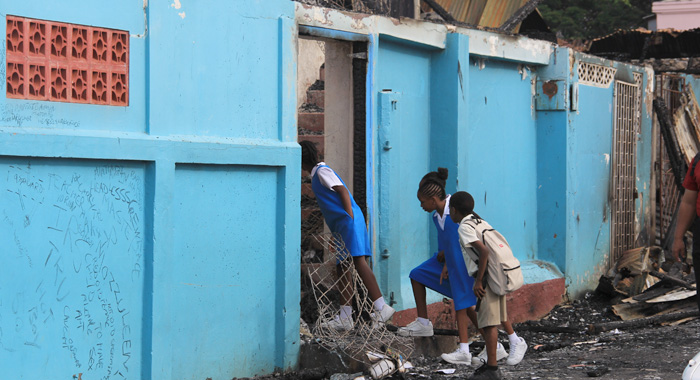 St. Mary’s RC students on Monday look inside the shell of the Verbeke Centre, which was gutted by fire Friday night. (IWN photo)

Counsellors from the Ministry of Education are expected to provide psychological support today (Monday) to Grade 6 students of the St. Mary’s Roman Catholic Primary School, in the aftermath of the destruction of their classrooms by fire Friday night.

A fire, which is said to have begun in a building belonging to the late Bertram “Timmy” Richards, also destroyed the neighbouring Verbeke Centre, where the students’ classrooms were located.

The Verbeke Centre, located on North River Road, Kingstown is an annex of St. Mary’s RC, the main part of which is located on the same site as St. Mary’s Cathedral, lower down that same street.

She said the counsellors from the Ministry of Education will meet with the 78 Grade 6 students at the Catholic cathedral in Kingstown “to provide some support for them”.

“And we (the school) will do little activities with them so that they will feel safe and ready to go again.

“And presently, we are looking at different places to accommodate them in the meantime,” Johnny further said, adding that the school was in conversation with building owners in Kingstown.

Johnny told I-Witness News that the fire was a “shock” to the school.

“But our motto says, ‘With God’s help we can succeed’, so we take it as a springboard from which we operate. So even if we are in shock, we know that God has a plan,” Johnny further said.

The school has 607 students.

5 replies on “Students to receive counselling after fire guts classrooms”