After 18 days of treatment in Cuba, Gonsalves says he’s ‘in good health’ 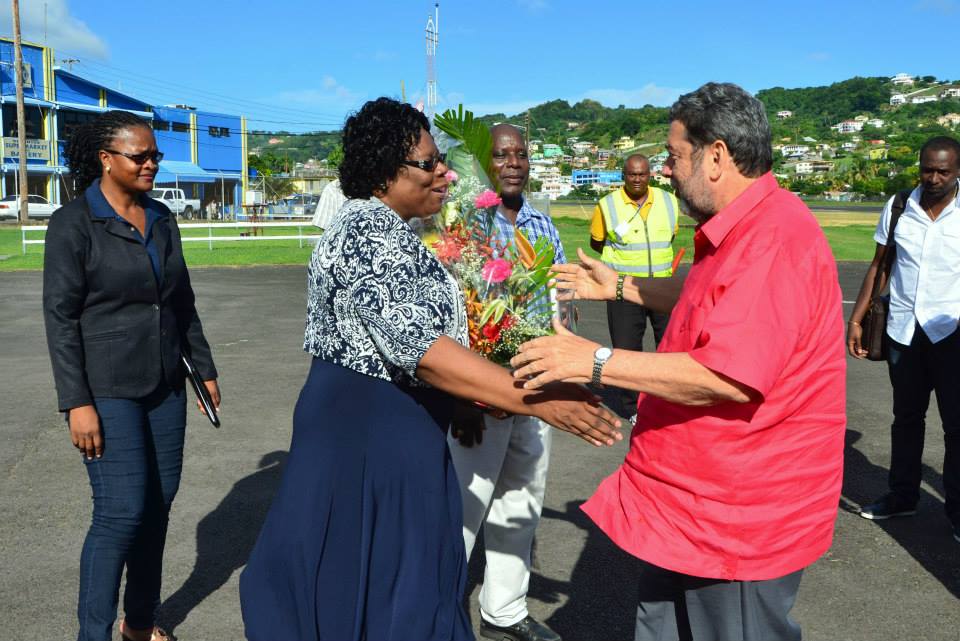 Prime Minister Ralph Gonsalves on Saturday said he is in “good health” after returning to St. Vincent from Cuba, where he spent 18 days receiving treatment for an injury to a muscle in his right thigh.

“First of all, I am very, very happy to be back. It is quite an emotional occasion to see so many persons who have come out here, including the Cabinet and the Cuban Ambassador and the Venezuelan Charge d’affaires,” he told reporters at E.T. Joshua Airport.

The 68-year-old Gonsalves thanked both his Cuban and Vincentian medical team and the Cuban and Venezuelan governments. Caracas provided the aircraft in which Gonsalves and his team travelled to and from Havana.

“I’m in good health,” Gonsalves said, adding that as his local doctors said of “the orthopaedic difficult” that “it will take a little while to be completely healed, but as you see, I am walking, I am pretty much there.”

He said that in Cuba, healthcare professionals analysed “every single possibility which could conceivably be problematic…

“I am in good health,” he said, adding that his heart, liver, kidneys, and prostate gland were checked.

“Well, I don’t have one — certainly not yet, and all matters relating to my blood, my bones — I mean the fellas checked everything conceivable,” Gonsalves said of the treatment he received in Cuba.

Gonsalves left for Havana in an air ambulance on Sept. 22, one day after his office announced that an injury to his right rectus femoris had seriously affected his mobility.

He said on Saturday that “the fundamental problem” is that he had injured his right leg when he was a boy, resulting in it being about three three-quarters of an inch shorter than the left.

“And basically, over the years, in addition to a knee problem which I had — bang it up several times when I was younger, as you get older, if you don’t do something to correct it, and one of the basic correctives is to put inside of your right shoe something a little more elevated so it puts it on balance so that it doesn’t put extra problems on your hip,” he said.

Gonsalves said his treatment in Cuba included walking and swimming, and a lot of physiotherapy, which local physiotherapist Denis Byram, who also accompanied him to Cuba, will continue. Gonsalves said the Cuban professionals have prescribed a particular approach.

He further told reporters that “fortuitously”, there is a CARICOM-Cuba summit scheduled for Dec. 8 and ALBA summit on Ebola on Dec. 14, both in Havana, and the Cuban professionals have asked him to check in with them to evaluate his progress.

He, however, said he might have to return to Havana in a few days for further discussions on the proposed ALBA summit on Ebola.

Gonsalves said that during the 18 days that he was overseas, he knows that many persons wished him well, and were positive and were lifting him up in prayer.

He quoted from Plato’s “Apology”, in which Socrates said, “Well, now it is time to be off, I to die and you to live; but which of us has the happier prospect is unknown to anyone but God.”

“I’d just like people to just reflect, and when occasions like this, when you have the head of a country, somebody in your family who gets sick — because the truth of the matter is this, sickness and the variations of sicknesses are part of the human existence. It may change in its various forms but is part of the human existence. And lucky be the family, which has no one who has any ailment in them,” Gonsalves said.

“And when persons want me to come back in a casket, they must remember one fact, if they think about it, it’s a simple thing you know. The world’s death rate remains steady at 100 per cent, because everybody has to go. There is appointed a time to die, and after death, the judgement,” he said.

He said that when someone gets ill, one should thank God for giving human beings the insight to help to make the correctives.

Gonsalves, who will lead his Unity Labour Party as it seeks a fourth consecutive term in office in elections due in December 2015, said he spent a lot of time in Cuba thinking and reading and planning things.

“Some may not like some of the fruits, because it may diminish their chances to replace the ULP at the next elections,” he said.

The Prime Minister’s treatment in Cuba is the second in a foreign country this year.

In April of this year, doctors ordered Gonsalves to rest as a result of an ankle injury, the Prime Minister said he sustained in his bathroom.

In July, Gonsalves was seen walking with a slight limp, and told reporters that he had injured his knee, but not seriously.

6 replies on “After 18 days of treatment in Cuba, Gonsalves says he’s ‘in good health’”