Spite of Bigger Bigs continues in a revised form 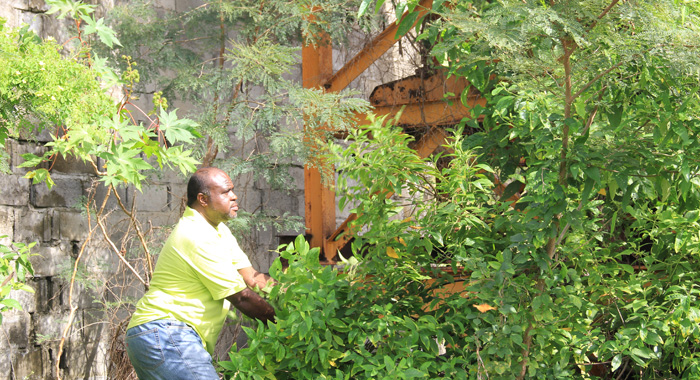 Mr. Leon “Bigger Bigs” Samuels was, in most people’s minds, attacked and his business destroyed because he ceased supporting the ruling political party, the Unity Labour Part (ULP).   His changed support from ULP to NDP in the 2010 elections brought wrath, spite, hatred, malice from the ULP government two months later, which turned out be pure evil hatred poured upon him, his family and his workforce. There were no boundaries considered in the destruction of the Bigger Bigs’ enterprise, the man, all those around and connected to him, and his company.

Bigger Bigs claims that the original reasons for cancelling his operator’s license to mine his land at Rabacca were magnified out of reality.  I believe they were trumped up by government ministers in several ministerial meetings.  His very words were, and still are  “the government’s claims are bogus”.

Now after returning his license on his birthday week before last, a license that has taken over three years to be returned or reinstated, is still worthless and unacceptable in terms and content.  A week after delivering the license, the unelected family regime Senator said there are now new terms demanded by the government which affect his rights and ownership. He also said the license would have to be ratified by the Cabinet.

One of those matters being the claim that some of the land now claimed by Bigger Bigs is government owned.  I believe that they are referring to the addition of land to that of Bigger Bigs adjacent to the river, an addition brought about by nature (Avulsion).

I write the following from British law; I hope it also applies to SVG.

They are also demanding as a term that Bigger Bigs gives the local farmers a public right of way through his land to their lands beyond.  Before there was a road and a bridge that has been washed away. In the past, the farmers were in recent years accommodated access by a “way-leave” rent paid by the government to Bigger Bigs and his predecessor in title, which the government have stopped paying.   This clause is little less than theft of his land and cannot possibly be legal unless Bigger Bigs agrees to it.

We have seen over the years many references to the Government owned firm BRAGSA burning vehicle tyres at Rabacca. I read with much disgust what the one of the country’s leading independent social analyst and commentators Patrick Ferrari (PF) wrote on page 10 of  The News newspaper of Oct. 10, 2014, titled “TB at Rabacca — Cancer and respiratory disease factory!” in which he exposes the government’s own involvement in a gross act of polluting Georgetown and the whole island. I am told that Georgetown has double the instance of lung cancer than any other area on the island. The charges laid against Bigger Bigs pales into a comparison when you consider the international offence of polluting the world’s atmosphere. I must say I admire PF because like myself, it is not party politics; we tell the truth the way we see it.  Because the NDP have no power at this time there is little they can do wrong, but I am sure like myself he would lambaste them as he does the evil he sees coming from any quarter. It is in my opinion pure unadulterated evil emanating from an evil Marxist-led regime.

We must at this point ask ourselves has the ULP Government become tyrannical? does the government fear the people? or do the people fear their government?  I must say I believe ULP government is acting tyrannical in this very matter, and many Vincentians fear them.

I also wrote a piece about tyre burning in 2013, but only one online media house would publish it, no printed news would publish or print it, entitled “THE BURNING OF TYRES THROUGHOUT THE EASTERN CARIBBEAN AND IN PARTICULAR SAINT VINCENT AND THE GRENADINES” If you would like to email  [email protected], I will be pleased to send you a copy of the article.

Bigger Bigs was beaten up on his own land by farmers whilst a policeman and politician looked on.  Both took no action to protect Bigger Bigs or control or restrain the perpetrators. Instead, they looked on with grins on their faces and spite, hatred, and malice in their hearts. The evil that I believe was sent down from those higher up the government ladder.

I believe Bigger Bigs was set up to be there to take a beating, yet he never retaliated, probably believing that they wanted to arrest him. Yet despite severe provocation, he remained a gentleman.

A team of Black Squad police officers along with a young man from planning department went to Rabacca and ripped down the gates to Bigger Bigs’ land when he was not there. It must be questioned on whose instruction was this force being used as a political tool?  Did they have court order to carry out such actions?

History will eventually tell if the Planning Department was instructed by a government minister or if a government minister was instructed by the Planning Department. The one thing I feel sure of is that nothing happens without the blessing, agreement or direct instruction of the Prime Minister. I very much doubt that the planning department would act against Bigger Bigs unless the PM approved of that action. The PM has told us on a number of occasions that he is in charge of every inch of SVG, and I am sure that includes every situation and action by every department.

Everything must be revealed at some point, you cannot stop that; too many people are in the know. There are too many future whistle-blowers, just waiting to feel the safety of regime change.

What do we know about the terms of any agreement between the government and the Taiwanese who are mining Rabacca aggregate and selling it? I have inspected their operation several times and must say I have found far more pollution on their activities than that of Bigger Bigs’.  What restrictions are in their license for mining?  Are they being given an unfair advantage over Bigger Bigs?  Unfair competition in this sense means that the competitors compete on unequal terms, because favourable or advantageous conditions are applied to them as competitors but not to others; or that the actions of them as competitors actively harm the position of others with respect to their ability to compete on equal and fair terms. It contrasts with fair competition, in which the same rules and conditions should be applied to all participants, and the competitive by them does not harm the ability of others like Bigger Trucking to compete. Unfair competition means that the gains of the Taiwanese and also BRAGSA are conditional on the losses of others, when the gains are made in ways that are illegitimate or unjust.

Can it be right that the Taiwanese are taking the bread from the mouths of Vincentians?

It took a series of comments by the Bishop of SVG’s Catholic Church to prompt the government into appearing to give Bigger Bigs back his license. Which has turned out on the part of the government to be, yet again, a matter of smoke and mirrors. They know that Bigger Bigs cannot accept the unfair and anticompetitive terms they are demanding.  They fully well know that those terms cannot be accepted, they are little more than administering a further application of spite, hatred, malice and pure evil.

I believe Bigger Bigs has been disenfranchised as a citizen and has been a target of human rights abuse, by the application of spite, hatred, malice and pure evil. He and his employees have been destroyed mentally, physically, and financially by such actions.

His plant and machinery at Rabacca has been stolen, robbed for parts and scrap metal, damaged and destroyed, by man and by none use in a sea-blast area. Millions of dollars worth of equipment now lies useless, a pile of scrap.

The amazing thing about Bigger Bigs is that he has remained a gentleman throughout the whole matter. Doing his own demonstrating by writing and displaying signs outside Parliament and elsewhere. He has begged and pleaded in meetings with minister and planning officials.  Recently he was arrested outside the offices of the Attorney General and had several charges brought against him. I am unaware of exactly what those charges are so I will not comment on them, except to say I just hope that they are not trumped up charges like those I believe he was accused of at Rabacca. I just hope the great magician waves his wand and the cases become magically nolle prosequi.

The shame must be on all Vincentians, at home and the diaspora, people who have sat back and let this happen to a man who could not be a nicer and more pleasant person, a gentleman of the first order. A man who deserved much better from us all.  By failing him, we must all be responsible for his mal treatment.  It’s a disgrace on the heads of all Vincentians.

The best way out of this matter is to rid ourselves of this government who has showered spite, hatred, malice on many Vincentian’s.

What I have written here is from my personal understanding of this matter from all the written matter over the months and years.  But beyond that, by my own firm belief in what I have written being true, and that is my opinion. Others may have other opinions.

If the ULP and its members are offended by what I write, I am sorry, but right is right and wrong is wrong regardless of love for party. I know the truth hurts the party, but members must learn that supporting your party when they are inflicting wrong on any citizen is an acceptance and involvement in an evil act on your part.  You are as evil as the inflictors, you must speak out, it’s the obligation of any decent human being to do so.