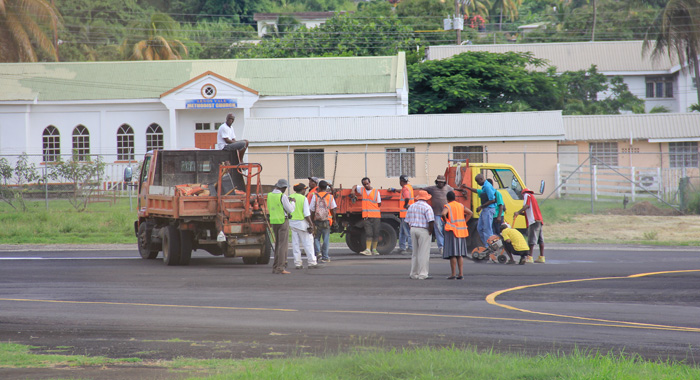 E.T. Joshua Airport, the main airport in St. Vincent and the Grenadines, had to be closed for several hours earlier this week after a segment of the runway was damaged as a jet took off.

A segment of the runway was damaged when an Amerijet Boeing 727 cargo jet took off on Tuesday.

The airport was then closed as the repairs were conducted, causing some flights to be delayed.

E.T. Joshua Airport is not approved to accommodate passenger aircraft of the type used by Amerijet to service SVG.

The Amerijet aircraft takes off in the direction of the mountains, while passenger aircraft generally take off towards the sea.

The Amerijet aircraft began taking off towards the mountains after a seaward takeoff caused damage to structures close to the end of the airport several years ago.

In May of this year, winds from a WC 130J “Hurricane Hunter” aircraft sent officials and other persons scampering at E.T. Joshua Airport as it blew away a tent and other paraphernalia set up for a ceremony to welcome the crew of the aircraft to the country. (See video below)

The aircraft had earlier aborted its first attempt to land at the airport.

St. Vincent and the Grenadines also has airports on the Grenadine islands of Bequia, Mustique, Canouan and Union Island.

The nation’s first international airport, at Argyle, is expected to be substantially completed by the end of this year, and become operational by mid 2015.