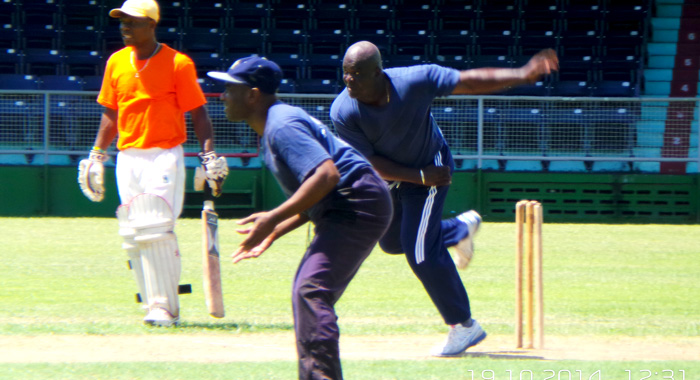 RSVG Police and Sion Hill recorded victories on Sunday in two of the matches in the Masters Cricket tournament at the Arnos Vale Playing Field.

In the morning match, RSVG Police batted first and reached 120/8 in their allotment of 20 overs, then restricted Henny Penny Masters to 107/8.

Life was made a little uncomfortable for the lawmen by Aviston Lawrence (21*) and Venold Collis, who combined good running between the wickets along with a couple of meaty blows in the late overs.

Browne, who showed a good level of fitness in steamy conditions, despite his girth, bowled two of his victims with deliveries of full length. Francis, who was at the receiving end of the batsmen’s aggression, was struck for 3 fours and 1 six.

Earlier, RSVG Police looked to be building an airtight case after captain, Trevor Bailey (23) and Gosnel Cupid (30) had put on 53 for the first wicket in six overs. But the lawmen then caved in under serious cross-examination to slip to 66/4. It was only a late flurry by Jeffrey Laborde (25) that sent the jury back into deliberation.

Cupid, who also brought off a neat legside stumping when in the field, struck 3 fours, 1 six and a three, while Bailey, who appeared to be in need of an oxygen tank, hit 4 fours.

Offspinners Henny Charles 3/8 and Cadwick Frederick 2/19 were the defendants who brought the lawmen near perjury.

In the afternoon match, Sion Hill Masters, behind half centuries from Bill Edwards (76) and Keon Jack (55), easily disposed of their opponents despite looking a few bowlers short.

Winning the toss and batting first Sion Hill got off to the worst of starts when opener Michael Duncan (0) was trapped LBW by the first ball of the innings, sent down by Reginald Jeffrey (1/20).

Edwards joined Jack and the pair added 128 for the second wicket before Jack went. He struck 5fours and 2 sixes. Edwards who added 33 with Syl Vanloo (14*) was caught on the log on boundary in the final over. He struck 8 fours and 1 six.

Set a score of just over 8 runs an over, North Leeward always looked to be South West of their target, blown off course by the loss of regular wickets and the inability to take advantage of the tame Sion Hill bowling.

David Ellis (35) broadcast his intention, but no other batsman picked up the signal, with Joe Horne (4/17) being the chief matador.

The competition will continue next weekend.