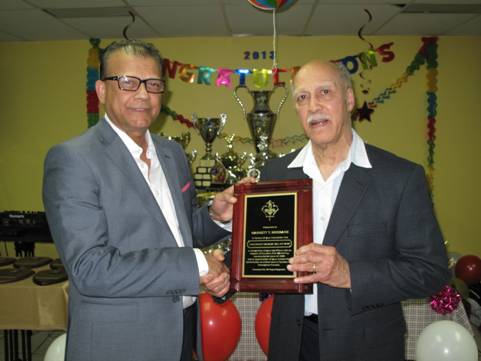 Brisbane’s sporting prowess has focused the attention of the rest of the cricketing world on St. Vincent and the Grenadines.

Garnet’s early cricketing experience began at the grass roots level at Victoria Park, where as a “Park Boy” he showed the promise of a cricketer in full ascendency.

Playing for Hairoun Cricket Club, Brisbane came under the umbrella and watchful eye of Frankie Thomas, who had tasted success in the more rarefied cricketing culture of his native Barbados. Thomas’ role in Garnet’s career was pivotal in that he was able to nurture his prodigious cricketing skills as Captain of Hairoun as well as Captain of the island team.

As a top line batsman, few possessed the classical array of shots played to all corners of the field with the grace and beauty of this talented young man. His bowling was equally impressive, sending down his orthodox left arm leg spinners with devastating accuracy.

In 1956 at the age of 17, Brisbane was selected for his country, in a game against Dominica. He was subsequently selected for the Windwards/Leewards combine team for a regional match against Jamaica, played in Antigua.

Honours were swift to follow for one so gifted. Brisbane joined the band of talented Vincentian cricketers — Neverson, Roberts, Bramble, Jackson and Mason to name but a few. These men shone like beacons in the cricketing firmament. They graced both St Vincent and the Windward Island teams, showcasing to the wider Caribbean, the abundant talent that existed in these smaller territories. They were always chomping at the bit for full West Indies recognition and perhaps selection to that esteemed group.

At the time cricket arenas offered only limited rewards and ambitious young men looked to greener pastures for advancement and more secure futures. Canada offered exciting opportunities and Garnet migrated there, hoping for a more secure life after cricket.

His cricketing achievements in Canada were legendary. He blazed the trail on the club circuit across that huge country, impressing fans and officials alike. His notable attributes in this sport led to his appointment as captain for the first One Day World Cup competition in the 1970s. This was played in the United Kingdom. History was made for this young Vincentian who distinguished himself amongst the great players of that era.