Trial century still no guarantee for team pick after 40 years 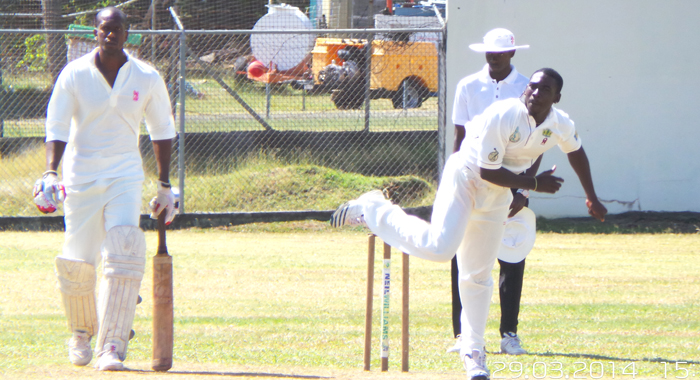 Casmond Walters was omitted from the 13-man squad and relegated to the reserves. (Photo: E. Glenford Prescott)

Forty-one years after top order batsman Philbert Fairban, made a well compiled century in a trial match at the Grammar School Playing field and still was unable to break into the senior St. Vincent cricket team, the issue is awaken after all-rounder Casmond Walters suffered a similar fate.

According to reports, Fabian, a police officer, was seen by many as a “cricket fanatic” as he would be on the playing field from early and would even engage the services of students from the St. Vincent Grammar School and even from the Girls High School to bowl at him. He, however, found himself in the unfortunate situation of having to battle against, Douglas Haynes, Julian Jack, Selwyn Allen, Sam Isle, Ken Providence, Colville Browne and Vibert Bute for a place in the top order.

Sadly, with all the top players already established in the team, Fairban, whose 113 may have landed him in many teams subsequently, was forced to sit out, fully appreciative that his coming may have been just a little ill-timed.

In 2014 Walters is a security guard, who has been part of the SVG teams that won the Windwards double of two-day and T20 over the last two years. But despite hitting a century in one of the trial matches, he has found himself omitted from the 13-man squad and relegated to the reserves. But unlike Fairban, Walters, a member of the all-conquering Team Rivals, also scored two half centuries.

His cause is not helped by the fact that the tournament this year does not include the T20 competition in which Walters has excelled.

His Team Rivals colleagues are said to be extremely upset over his omission, while reports say that the SVG Cricket Association wrote to the Selection Panel of Lance John, Gosnel Cupid and Uriah “Tommy” King raising concerns about Walters’ exclusion from the 13-man squad.

“I cannot understand how a man can perform so good in trials even scoring a century and still cannot get into the team. Somebody has to explain that to me,” said a visibly annoyed Roland Wilkinson, a Team Rivals and SVG player.

The consensus is that Walters should have been named ahead of the other off-spinner in the team the Radcliffe player, Rodney Lawrence.

Lawrence, a tall off-spinner, said by many to be a more attacking option with more variations, is said to be not as competent with the bat as the adjustable Walters who bats from one to seven for Team Rivals.

The sole newcomer in the team, opener Gidron Pope, is also a more than useful off-spinner and this may also have created more obstacles for Walters’ inclusion in the team to defend the Windwards title next weekend in St. Lucia. Pope was the leading bowler in the 2014 Windwards U-19 tournament played here in June. He also scored a century in the trials.

Pope, a Windwards player, scored the first century in the 2014 domestic season and hit a double century (248) in the United Insurance Secondary Schools Cricket competition — the second by a batsman in the competition’s history, following Michael Neverson’s 235 for Emmanuel Secondary School in 1998.

The selectors, in addition to Walters, relegated to the reserves Asif Hooper and Desron Maloney, who were all part of the SVG winning unit T20. Pacer Romario Bibby is the fourth reserve.

The stylish former Windwards U- 19 batsman, Marvin Small after a successful domestic season where he was among the leading run-scorers, gets a recalled after not doing too well on his first outing, while the pacey Kesrick Williams is given the responsibility with the new ball after representing the CCC in the regional competition.

Top players, Sunil Ambris and Kenroy Peters are unavailable due to other commitments, while Ray Jordan continues his remedial work for improving his action, a release from the SVG Cricket Association said.