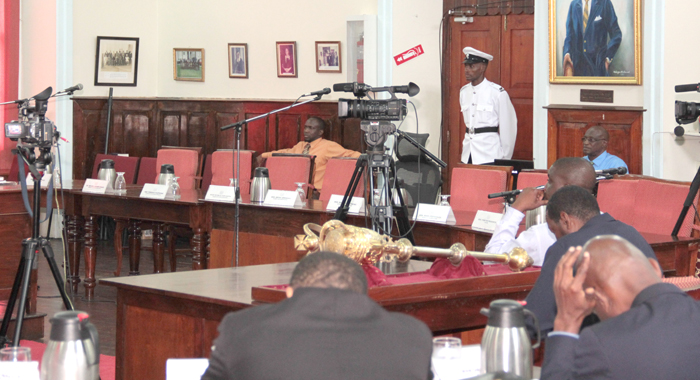 Prime Minister Ralph Gonsalves has dismissed as unjustified the reasons opposition legislators gave for staying away from last Friday’s meeting of Parliament.

In a letter to House Speaker Hendrick Alexander, Opposition Leader Arnhim Eustace said opposition lawmakers were boycotting the sitting to “protest against certain negative developments in out country.

“These include the continuing persecution of businessman Bigger Bigs, the case of the High Court registrar, the ongoing poor fiscal and economic situation, including the high and increasing levels of unemployment, the Clare Valley fiasco, government’s debt to the private sector, and the state of the National Insurance Services, among others.”

While Parliament was in session, Eustace, along with Central Kingstown representative St. Clair Leacock, and MP For the Northern Grenadines Godwin Friday, both also opposition lawmakers, appeared on their party’s daily radio programme.

“That’s why we are here on the programme, because we believe it is important to deal with a lot of the issues, where the government acts as if no one else exists but themselves in St. Vincent and the Grenadines, and our population is forced into positions which make life harder and harder because of the state of affairs in St. Vincent and the Grenadines,” Eustace said on the programme after reading the letter to the Speaker.

Meanwhile, in Parliament, Gonsalves noted that Friday’s meeting of lawmakers was originally scheduled for Oct. 2, but due to his visit to Cuba for medical attention, it was moved to Oct. 9, and then later postponed to Oct. 24.

Related: After 18 days of treatment in Cuba, Gonsalves says he’s ‘in good health’

He said this means that some of the events referred to in Eustace’s letter occurred within the period which it would have been required by the Standing Orders to submit questions to the House.

The opposition did not submit any questions to Parliament, although they can ask 27 questions for oral answers, in addition to questions for written responses.

“Therefore, one must conclude that they had determined, before several events had transpired, not to submit any questions to the House,” Gonsalves said.

Regarding the judgement in the case involving former registrar of the High Court, Tamara Gibson Marks, Gonsalves said even if the Opposition has submitted any questions after the Oct. 14 court ruling, the questions would not have been admissible because they would have been too late.

Gibson-Marks was fined EC$10,500 after pleading guilty to two charges, including the theft of EC$21,925. She paid back the EC$21,925 and a further EC$300,000 for which she was not charged her lawyer and Gonsalves have said separately.

“The point I want to make, Mr. Speaker, is that there is a potpourri, a make up of reasons, like if you trying to cook a pot, you don’t know what to put in it, you take all the little scraps here and there and you throw it inside. And this is what has happened in this particular case,” Gonsalves told Parliament.

Gonsalves said there is “no persecution of Bigger Bigs, or, indeed, any continuation of persecution; none from the beginning”.

Bigger Bigs, a businessman whose real name is Leon Samuel, has been involved in a protracted battle with the government since February 2011 to have reinstated a licence to mine aggregates on lands he owns at Rabacca.

Last month, the Planning Board gave Samuel what he regarded as a new licence, but Gonsalves has since said that the document was to say that the lands can be used for mining, but Cabinet has to approve an actual licence to mine.

Gonsalves told Parliament on Friday that his government acted under the law, based on the advice of state officials, to terminate the mining operations at Rabacca.

He said he had told Samuel to meet with state officials to come to an agreement so that his mining can be resumed.

Gonsalves told Parliament that Samuel only met with the state officials after the Bishop of the Catholic Church encouraged him to.

Subsequent to that, the Planning Board took the relevant decision after a sub-committee met with Samuel and his advisors, Gonsalves said.

He pointed out that only three members of the 15-member Planning Board are appointed by Cabinet. “It is not a political issue. And I have no doubt that more will be said about this by me and others as we go along,” he told Parliament.

“They said that she would never pay back the money, she would never be charged. When the Honourable Attorney General filed for disbarment of the registrar, the Leader of the Opposition said that that is just a smokescreen; nothing going come of that.

“The former registrar came back, she paid back the monies, she was arrested and charged, the Director of Public Prosecutions, which is an independence office, laid the charges in accordance with law, she taken before the court — the magistrate court, she pleaded guilty on two charges — not on one that was withdrawn by the Director of Public Prosecution, her lawyer indicated that she is agreeing to the voluntary disbarment,” Gonsalves said.

“This government had nothing to do with charging anybody. We don’t control the DPP; we don’t control the law court. And it is really an insult to the independent institutions of this country that this is used as a reason for not coming to Parliament. It is bizarre. The reason, frankly, is schizophrenic,” said Gonsalves, who is also Minister of Legal Affairs.

“Mr. Speaker, justice is not a cloistered virtue and it must be subjected to informed, robust and respectful criticism and such robust, respectful and informed criticism strengthens the judiciary, not weakens it,” Gonsalves further said.

“But what weakens the public’s perception of the judiciary and the judiciary itself and law and order, is when responsible officials like the Leader of the Opposition, set about to make comments which are unjustified, in the sense that they lack any material factual base or legal base, or that they are for political purposes, or designed to scandalize the court,” he said.

Gonsalves, who is also Minister of Finance, said the issue of the nation’s fiscal situation has been debated over the years, including in the budget speeches.

“And we have spoken about the challenges and what we have done, and the people understand the difficult circumstances and the way in which we are keeping things together and making progress going forward.

“I don’t intend to canvass matters here, but simply to say, if they return, before the next elections, to this Honourable House, … it would be reasonable for one to conclude that the on-going poor fiscal and economic situation, including high and increasing levels of unemployment, would have been solved or on the way to be solved, and therefore justifying their return.

“So that on the basis of this, I don’t expect to see them for the Estimates debate for 2015 or the debate on any other matter really,” Gonsalves said.

On Sept. 19, a house collapsed at the government’s housing project in Clare Valley.

Gonsalves said the situation has been dealt with “and is not a fiasco.

“A problem arose and we identified quickly the problem and set about solving it.”

He said that two homeowners, whom he did not identify, had telephoned him saying they are satisfied with his response.

Gonsalves, who said he had not visited the area since Oct. 13, said the homeowners had told him that a retaining wall is being built, drainage is being put in place, and six of the worst affected houses are being addressed.

Gonsalves said he has contrasted the response of his government to the “avoidable of responsibility” by the Opposition Leader when he was Minister of Finance, when there was a slippage on lands that at Gibson Corner that the government had sold to homeowners.

The slippage caused the houses to crack extensively, and the area was later deemed unsafe.

Government’s debt to the private sector

On the question of the monies owed by the government to the private sector, Gonsalves said:

“Mr. Speaker, we do owe the private sector and that is a matter on an on-going basis, and we do pay our debts on an on-going basis. But I will say this, if what we are owed in taxes by the private sector in the aggregate, what we owe them will be wiped out and load of money left over to do lots of things. Of course, this is not in any way to justify anyone being owed any money legitimately on contracted goods and services provided to the state.”

State of the NIS

“I don’t know the state of the National Insurance Services he is talking about. It can’t be the issue of the matter, which was fully debated here, which was ventilated,” Gonsalves said in response to Eustace’s mentioning of the state-run social security agency.

“So, Mr. Speaker, what we have here — and he says among others, they will come in, no doubt, as the mood takes him. This is entirely irresponsible on the part of the opposition. They are scrunting (scrounging) around for a strategy, a political strategy, and they are just failing at every turn. This is failing today and will fail, just like the ‘Ring the Bell, Comrade’ campaign,” Gonsalves said.