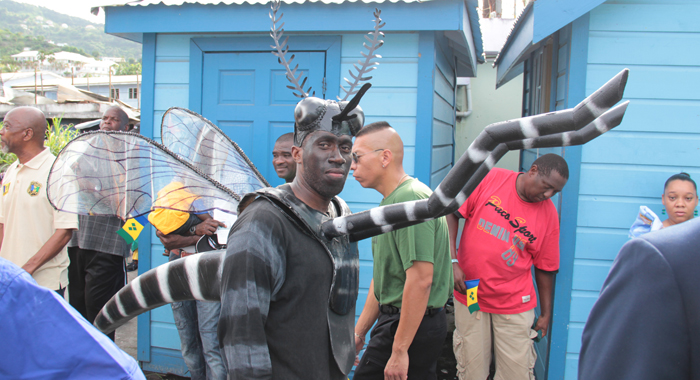 The Ministry of Healths chikungunya information mascot at the Independence parade on Monday. (IWN photo)

The mosquito-borne virus, chikungunya has now spread throughout St. Vincent and the Grenadines after it was first diagnosed locally in April.

Minister of Health, Wellness and the Environment Clayton Burgin told Parliament on Friday that as of the end of August, there have been 920 reported cases of the virus.

“But this, as far as we are aware, is significant underreporting, owing to the many misconceptions about the disease, people not seeking medical attention for mild cases, and also self-diagnosis,” he told lawmakers.

He said after the outbreak in April, the cases were initially confined to the Northern Grenadine island of Bequia, but the virus has affected the whole country, with cases reported on all of the Grenadine islands, as well as St. Vincent.

Burgin said that since the outbreak began, the ministry has responded by putting measures in place to reduce the spread of the virus.

“Many strategies have been used, which include health promotion activities, vector control activities, and public health surveillance,” he told Parliament.

Several activities have been activated and are on-going to raise awareness about the virus here in SVG and all forms of media and community outreach are being utilised to inform the public of the threat of this disease, Burgin said.

He said many health promotion activities have been held, including radio programmes, and special reports have been carried on all print and electronic media, as well as social media.

Posters and brochures are being distributed to schools, health centres, some churches, and all ports of entry.

Two physicians were trained in Guadeloupe earlier this year in the early detection and management of chikungunya.

The insect vector control programme has since been integrated and intensified and fogging is conducted regularly, and many areas of St. Vincent are fogged at the same time, Burgin said.

He said four four-member teams are deployed throughout St. Vincent daily to conduct fogging operation and fogging is done on three consecutive days in areas that are deemed to be hotspots, while there are regular fogging operations at every locality in the country every three days.

The Health Minister said that the Insect Vector Control Unit is playing a pivotal role in source reduction.

“The professionals in that particular unit go into communities and carry out extensive inspections in an attempt to identify breeding grounds for mosquitos.”

Upon finding these sites, they destroy the mosquitos and educate householders on how to reduce breeding grounds.

“Mr. Speaker, the Ministry of Health, Wellness and the Environment understands that the fight against the Aedes aegypti is indeed a very difficult one. Therefore, we continue to urge everyone to play a role in helping to decrease the spread of this virus. We have engaged stakeholders at all levels,” Burgin said.

He said multiple meetings have been convened to engage stakeholders such as NGOs, faith-based organisation, service clubs, and community groups, all of which have been helping the ministry to respond.

He said the Ministry is also working to debunk myths surrounding the chikungunya, as misinformation only helps to spread the virus.

Burgin said his ministry is discussing innovative ways of spreading information about the virus.