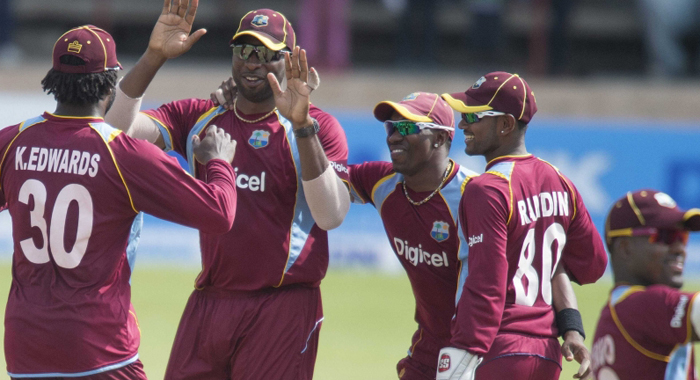 The West Indies on their India tour. (Photo: AFP)

The parties in the dispute that resulted in West Indies cricketers ending prematurely their cricketing tour of India two weeks ago have decided to meet in in Trinidad tomorrow (Friday).

Hans King, press secretary to Prime Minister Ralph Gonsalves, said in a statement on Thursday, that the meeting was agreed upon through the facilitation of Gonsalves, W. “Dave” Cameron, president of the West Indies Cricket Board (WICB) and Dwayne Bravo, representing the overwhelming majority of the top West Indies cricketers.

King said the meeting will attempt to resolve the current impasse between the WICB and the top players.

“Both sides in this dispute will be accompanied by their respective members/advisers,” King said.

He said the meeting was agreed upon today (Thursday) and efforts are being made to secure the attendance, too, of Wavell Hinds, president of the West Indies Players’ Association (WIPA).

“The Prime Minister has been unable to contact Mr. Hinds although he was informed of the scheduled meeting through a text message from Mr. Bravo,” King said.

The meeting will have two items on the agenda: the resolution of the impasse (centrally the contractual terms and conditions of the players); non-discrimination and non-victimisation of the players by the WICB, King said.

“Prime Minister Gonsalves will be available for consultation by way of the telephone. His prior engagement at a meeting of the Monetary Council of the Eastern Caribbean Currency Union (ECCU), of which he is currently the Chairman, on the very 31st October 2014, makes his attendance at the meeting in Port of Spain highly improbable,” King said.

“It is to be emphasised that Mr. Bravo and his colleagues are reaffirming their availability for selection for the Test, One Day, and T-20 teams for the upcoming West Indies Tour of South Africa. The Prime Minister has been advised that the WICB is aware of their availability for selection in the various formats for the respective players,” the Prime Minister’s spokesman said.

“It is to be noted, too, that as at 7:55 p.m. last night, October 29th, 2014, Mr. Cameron of the WICB affirmed, upon a query from the Prime Minister, that he was unaware of the selection, thus far, of any team for the South Africa tour.

“The Prime Minister has been informed by Mr. Bravo that he and his colleagues are seeking the possible intervention of the International Cricket Council (ICC) in the current impasse. The Prime Minister was shown a draft letter to the ICC which was sent last night,” Kings further stated.

He said Gonsalves met with Bravo in St. Vincent and the Grenadines, Wednesday evening and Thursday morning at the Prime Minister’s invitation.

“The Prime Minister wrote Mr. Cameron on the subject of the impasse on October 23rd, 2014, and has had four telephone conversations with him since then,” King said.

“The Prime Minister is urging the disputants to put the interest of West Indies at the core of their deliberations, having due regard to all the relevant considerations and circumstances,” King said.

3 replies on “Gonsalves facilitates meeting of parties in Windies impasse”