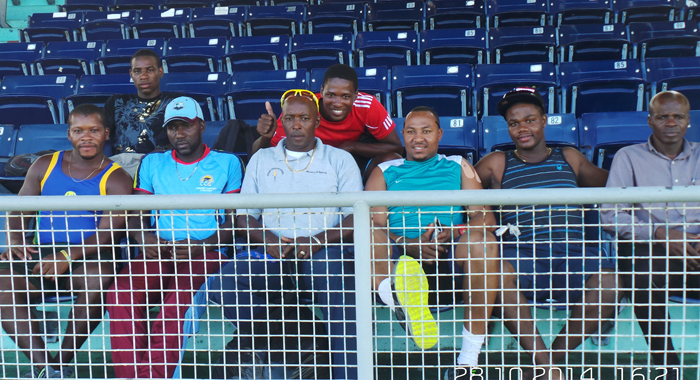 Some members of the senior national and management who attended the session.

Some members of the 13-man St. Vincent and the Grenadines senior cricket squad in the Windwards competition participated in a session on Tuesday entitled “How to deal with the Media”.

The session came before the team left the country on Wednesday to defend the Windwards championship in St. Lucia.

The Vincentians are in search of a third straight title after winning the tournament in 2012 and again in 2013.

On those two occasions the Lindon-James led team also won the T20 segment of the competition. But owing to the shift in the regional schedule and organisation of the regional T20 competition, the Windwards will not be hosting that phase of competition.

The players were advised on how to giving suitable answers during media interviews, what to avoid during an interview, and employing confidentiality on internal team information.

In addition, they were advised about conducting themselves as ambassadors and role models, with references made to some past incidents involving some local players who went on to represent the Windwards and West Indies.

The consumption of alcohol and the use of illegal drugs were also addressed, with the adverse effect of these two agents on the performance of players and teams pointed out.

The players were also asked to be properly attired when representing their teams, whether school, village, and most of all, the national team.

Manager Ortis Jack and coach, Deighton Butler who were present expressed satisfaction with the session and explained that some players had last minute things to do and hence their absence.

In the meantime, Coach Butler said he is confident that the SVG team will retain the title, based on the composition, and experience of his squad.

“We have a good squad with our spin-bowling area being of a high quality in the hands of [Alston Bobb, [Keiron] Cottoy and [Kenneth] Denbar, and the batting will support the bowling as we have the experience of Romel Currency, [Donwell] Hector, [Miles] Bascombe and the captain Lindon James, and these guys have what it takes to score runs,” he said.

Butler said that although the new ball bowlers may appear not as formidable as in the past, they can still create problems for the opposition.

The new ball will be shared by former West Indies A team left-arm seamer, Delorn Johnson, former, West indies U-19 all-rounder, Dawnley Grant and the pacey Kesrick Williams, who will be hoping to use what he may have picked up from former West Indies great, Curtly Ambrose while being a part of the CCC unit.

Butler felt that Grenada will probably be once again their main hurdle to winning the title, but was not overlooking the chances of home team St. Lucia and former champions, Dominica.

“Grenada has Devon Smith and he is an experienced and dangerous player, so we have to bring our A game to make sure that we take back this title.

“I am not ignoring the threat of Dominica and St. Lucia because both of those teams have good young talent, so we cannot lose focus against them. And remember that St. Lucia are playing at home, so that will be a plus for them as well.”