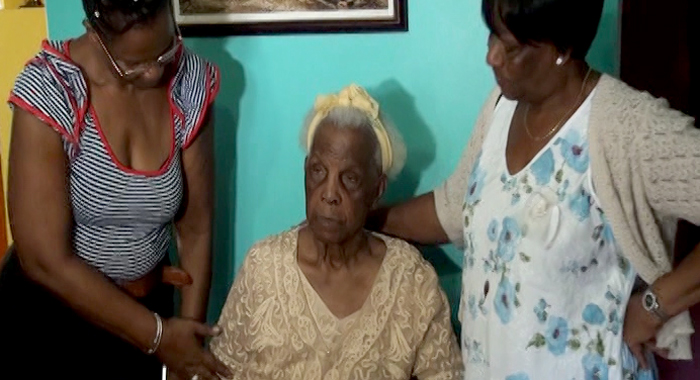 She has five children, one of whom has died.

The centenarian was thankful and praised God for all those who came to celebrate with her. She said that it was a joy to her heart to see the turn out.

She blessed her daughters and son for being present, and pointed out that her first son, Fred, who passed away in England, and Sir Frederick were good friends.

Morgan’s daughter, Anselma Rose, stated that she is happy that her mother can be recognized for the important contribution she has made to the development of the community and St. Vincent and the Grenadines.

Meanwhile, Miguel said that long life is indeed a blessing, and bestowed her love and blessings upon Morgan. Miguel also remarked that Morgan is a very hospitable and wonderful person.

Sir Frederick stated that it is always a pleasure to meet with people to help them to celebrate their 100th birthday. He said he is impressed with people who have reached that age.

The Governor General also said he has observed that centenarians have certain qualities in common. They have a strong belief in God and that faith helps them to overcome lots of difficulties in their daily lives; they realize the important role of nutrition and diet; but most important is the care they get from their relatives. To this end, he expressed gratitude to Morgan’s children for supporting her over the years.

Burgin said he has known Morgan since he was a child going to primary school in Brighton. He said he is pleased to celebrate her 100th birthday with her and her family and wished that she would live to see many more birthdays.

Burgin said that the Ratho Mill to Belvedere corridor of the country is very famous for producing centenarians.

He emphasized that several persons living in and around these areas have live for over 100 years.