Ecuadorians to begin building bridges in SVG in 2 weeks 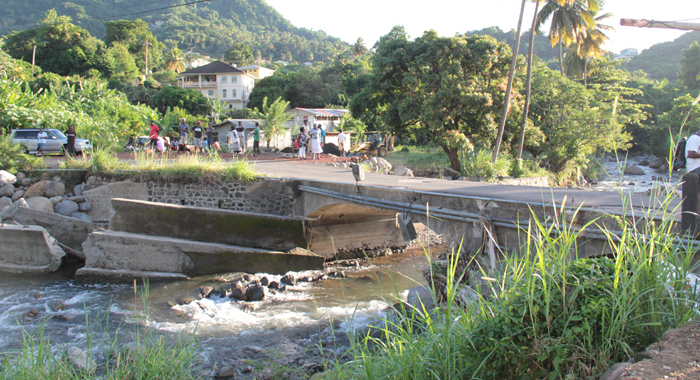 The new Hope Bridge will be the longest in SVG. (IWN photo)

Actual physical work should begin within the next two weeks to rebuild the bridge in Hope, Penniston, which was damaged during the passage of the trough system on Christmas Eve.

The double-lane bridge, which will be 23 meters long and eight metres wide, will be the longest in St. Vincent and the Grenadines.

It one of four bridged to be constructed by Ecuador over the next eight months.

The other three will be built in Sharpes, and Plan in Chateaubelair and Kakarta in Fitz Hughes in North Leeward.
The total contribution by Ecuador, whose Army Corps of Engineers, along with Vincentians workers will build the bridges, will be EC$11.3 million.

Prime Minister Ralph Gonsalves told a ground-breaking ceremony in Penniston this week, that a temporary walkway will be built to facilitate pedestrian traffic during the construction of the bridge.

He said some of the 45 members of Ecuador Army Corps of Engineers who are in the country to work on the bridges, will be involved in administrative work and the others will be involved on the various bridges.

Their budget includes monies for the employment of Vincentians to help them on each of the sites. The government of SVG is supplying the Bailey bridges, some of which were donated by St. Lucia and the World Bank.

Gonsalves, however, said that the abutments and other work require a certain level of technical expertise.

He further said he hopes that President of Ecuador, Raphael Correa, can visit St. Vincent when the bridge is complete.

Meanwhile, Hudson Nedd, permanent secretary in the Ministry of Works, noted the importance of the Hope Bridge to the community and the rest of the nation, noting that Vermont is one of the country’s breadbaskets.

He noted that the project has been long in coming, saying that the ministry has contemplated the reconstruction since the early 2000s, but had to shift its efforts to other locations.

“The pie is small, and I know the people of this community, I know the staff of our ministry has been anxious to get going with some of the initiative we have planned,” Nedd said.

He pointed out that over the last five years the nation has been affected by natural hazards.

“But clearly, what we have in our arsenal does not or cannot match the scale or the magnitude of rehabilitation required. At times, the Ministry of Words feels overwhelmed and it is not that I am really making an excuse for any inefficiencies that may also exist within the structures of our ministry, but, for the most part, help from outside the staff is a necessary good,” Nedd said.

The public servant expressed graduate to the government and people of Ecuador, saying they were not only contributing financing but also “sweat equity”, adding that this is commendable.

He said he was very appreciative of the efforts of the Prime Minister, the Cabinet, and the Ministry of Foreign Affairs for “facilitating the fruits of South-South cooperation”.