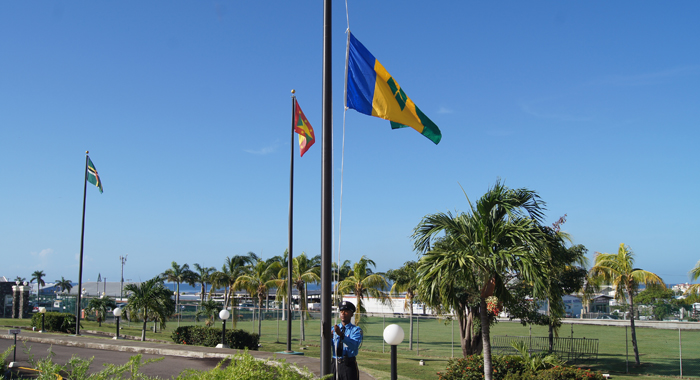 The Vincentian flag is hoisted by Officer Joseph Cyrus.

The Vincentian community in St Kitts and Nevis came together last weekend to celebrate their country’s 35th anniversary of Independence, with a church service, luncheon and flag raising ceremony.

The church service was held on Sunday at the Word of Life New Testament Church of God, where the Pastor is Vincentian Matthew Hepburn. Later that day, the Vincentians gathered for a luncheon at Manhattan Gardens Restaurant, where they raised a toast to SVG.

On Independence Day, the Vincentians who work at the Eastern Caribbean Central Bank (ECCB) hosted a flag raising ceremony on the premises of the bank.

Governor of the ECCB, Sir K. Dwight Venner joined the rest of his fellow Vincentians as they celebrated the milestone in their nation’s history.

During the ceremony, the group paid special tribute to distinguished Vincentian, the late Patrick Prescod for his contribution to the development of music in SVG, with a rendition of the hymn, “The Right Hand of God.” Musical accompaniment was provided by Andel Jackson, Dr Ankie Scott-Joseph — one of Mr Prescod’s music students, and Xadane and Kijaune Williams.