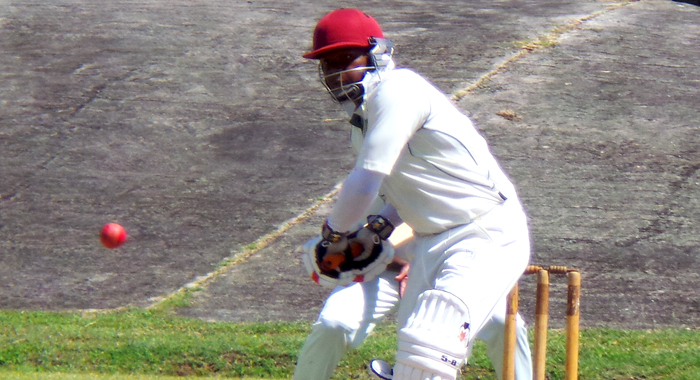 Defending champions St. Vincent and the Grenadines pulverised St. Lucia Thursday on the opening day of action in the Windward Islands competition at the Beausejour Cricket Ground to reach 379/7 in 108.4 overs after being asked to take first knock.

Team manager Ortis Jack said that while the conditions were good for batting, the Vincentians still had to battle the early moisture owing to the early start.

“The wicket is a beauty. Our guys batted very well because we went in at 9 a.m. on a seaming pitch, but after the first hour, Miles [Bascombe] and [Donwell] Hector played well and then after they went, we had a very good partnership between [Romel] Currency and [Keiron] Cottoy,” Jack said.

Hector and Bascombe featured in a century partnership for the second wicket after debutant Gidron Pope (5) was dismissed early in the piece.

With the departure of Bascombe, who struck 7 fours and 2 sixes in his innings, Hector and Currency then set about turning the screws on their opponents, but when it looked like both men would pass three figures, they both fell. Hector went as he hit a catch to midwicket off left-arm spinner Larry Edwards (2/89). He displayed savage elegance to hitting the ball powerfully on both sides of the wicket intermixed with some sublime drives in the arc between mid-on and square-leg. Hector, who was mystifyingly omitted from the Windwards last year owing to what some say was a “phantom report”, looked a focussed man as he counted 13 fours and 1 six. Currency, who was then joined by Cottoy in another solid partnership, was then adjudged LBW to the same bowler — a decision that the SVG camp felt he was a bit unlucky to have go against him.

Cottoy, whose batting has improved by leaps and bounds, was at his enterprising best as he used his feet confidently to hit the spinners over the top and through the offside with a touch of class. He perished as his team upped the tempo for quick runs.

Left-arm spinner Gairy Mathurin 3/82 from a marathon 31 overs was the leading wickettaker for his team.

“I don’t think St. Lucia used the early conditions well. They were too short and got carried away with the dampness of the wicket and the grassy surface,” Jack said in giving an assessment of day one.

The Vincentians are expected to declare overnight in search of an outright victory in the two-day affair, but Jack recognises the though task in collecting full points.

“It may be hard to bowl them out twice. We have six bowlers with lots of options for [captain] Lindon [James]. We can win, but we will have to bowl well”.

The Vincentians omitted opener, Marvin Small and off-spinner Rodney Lawrence from their final 11.

In the other match at the Mindoo Phillip Park, captain Liam Sebastien struck a brilliant 127 to help Dominica post 276 after taking first knock. Kevin James (37) was the next best score.

Left-arm spinner Denis George 5/51 was Grenada’s best bowler. At the close Grenada replying were 62/1 with veteran opener and captain Devon Smith on 37*.