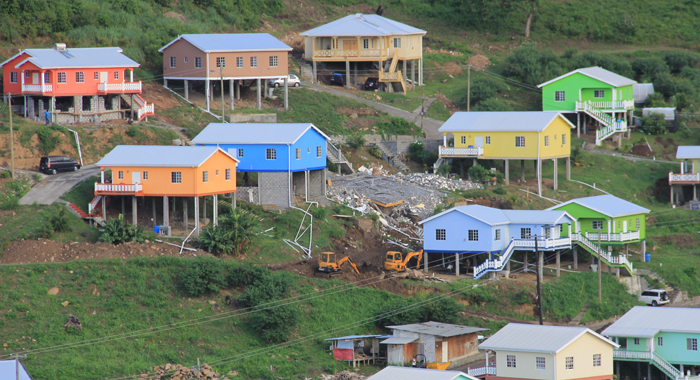 The geologist who examined the soil at Clare Valley after a three-bedroom concrete house in the government’s housing project there collapsed in September has called for a detailed investigation of the house that collapsed.

Dr. Richard Robertson, in a report to the government, said the investigation will help to understand better the load-bearing capacity of the foundation and its interaction with the ground.

“The objective should be to obtain knowledge that may be applied to other similar structures in the area,” Robertson said in the report.

Prime Minister Ralph Gonsalves read from the report in Parliament last week. He told lawmakers that a detailed investigation has been conducted through the works of Chief Engineer Brent Bailey, and independent engineer Dexter Gellizeau.

Robertson’s report also said the structural integrity of each building in the area needs to be re-examined, particularly the ones in which there has been reported unusual vibrations, or where there are significant drainage problems.

Gonsalves said six of the houses are already being worked.

The geologist, in his report to the National Emergency Management Organisation (NEMO), for which Gonsalves has ministerial responsibilities, also said earth retention structures need to be designed and constructed to strengthen the unrestrained and steep slopes created in the area by housing construction.

“Some of these measures may include soft solutions, such as sediment traps and the planting of vegetation,” Robertson said in the report.

Gonsalves said this is being done with the construction of a retaining wall.

“Drainage in the entire area needs to be re-examined and measures implemented to adequately cater for surface runoff from buildings, so as to minimise the erosive impact of the water and its potential to change underground water conditions, such that it leads to mass movement downslope,” Robertson said in the report.

Roberston said the conclusion of the report is “essentially the same” as his briefing given to Director of NEMO, Howie Prince and Minister of State in the Ministry of Works, Sen. Julian Francis, “that the collapse had more to do with the construction issues than with the land.

“The site is one, which like lots of sloping ground elsewhere on the island, will pose some challenges, but not insurmountable,” the report said.

The site was classified as one of high landslide potential by a 1980s study, “but this is the case of most of the sloping land in St. Vincent and the Grenadines, given the nature of our geology,” said Robertson, who is a Vincentian and head of the Seismic Unit at the University of the West Indies in Trinidad.

“However, no remnant scarps from past landslides were observed on the site and there is no evidence of large-scale mass movement of earth material downslope in the area. Some construction should be possible in this area, as long as adequate account is taken of the site conditions. Urgent remedial works is needed in order to stabilise steep slopes created during construction and to deal with runoff from building and roadways, so as to minimise the erosive impact of water,” Robertson said.

“Mr. Speaker, the long and short of it, the report speaks to an area where you can quite properly do the housing construction. You just have to build suitably. There are some recommendations for corrective measures. What he is recommending is already taking place, through the works which we are doing and in conjunction with the ministry of housing,” Gonsalves said.

Since the collapse of the house, it has become public that some homeowners have been complaining to the state-owned Housing and Land Development Corporation (HLDC) that their houses are shaking, about tiles popping off floors and walls, and poor drainage, among other problems.

Physician Katisha Douglas, the owner of the house that collapsed, has filed more than one complaint to the HLDC, including one days before the collapse.

No one was injured when the house was collapsed and the structure has since been demolished.