Will Gonsalves call elections before Argyle Airport is complete? 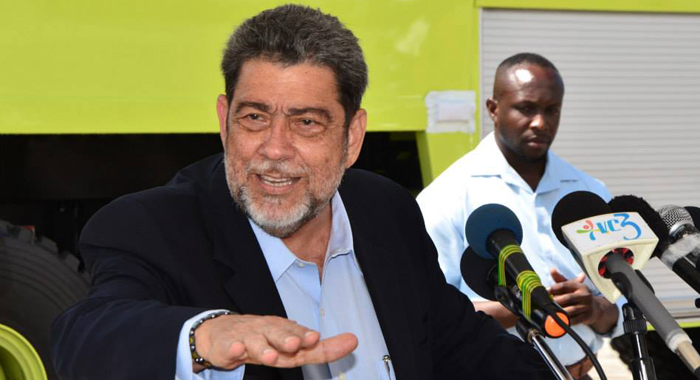 Prime Minister Ralph Gonsalves has said that the has not ruled out calling the next general elections, constitutionally due by December 2015, ahead of the completion of the Argyle International Airport, scheduled for mid-2015.

Gonsalves had previously said that he will not call elections before the completion of the airport, which state officials have said will be “substantially complete” by the end of this year.

But he said on Monday that if the opposition New Democratic Party “humbug me”, he would much call the elections and ask the electorate to decide who they want to finish the EC$700 million airport, which has been under construction since 2008.

Gonsalves spoke of the 2012 debate in Parliament, when the government asked lawmakers to approve borrowing EC$80 million to complete the project.

The opposition abstained from the vote.

“I asked them in the Parliament if they want me finish the airport with bottle stopper or plate money,” Gonsalves said Monday, during a ceremony where three fire trucks for the airport were officially received by the government.

“They opposed it,” he said of the borrowing. “All what you hear they talking bout now, gi’ them a change they going finish it. You think Vincentians dotish? Well, it going finish before the elections. And if they humbug me, and the way they going, I’ll call the election before it finish and leh the people decide who they wah finish it; them or me,” Gonsalves said of the airport, which has missed several completion deadlines.

“They better doh humbug me. I said before that I wouldn’t call the election before the airport done, but they getting on as though they want provoke I. And if they provoke me too much, I will call the thing and say, ‘Listen, choose who you wah finish it; De Comrade or [Leader of the Opposition Arnhim] Eustace. And if you say Eustace, I will stay up at Gorse and enjoy meself like a Rasta man up there,” Gonsalves said to laughter, as he referred to the area in which his private home is located in eastern St. Vincent.

Gonsalves said that he might even surprise his party’s general secretary, Sen. Julian Francis with the announcement of the election date.

“I’ll take the letter, handwritten, up to the GG and let him write a handwritten one with the dissolution of Parliament,” Gonsalves said.

In the lead up to the 2010 general elections, Eustace said that Gonsalves would have announced Dec. 15 as the election date for the last elections.

But Gonsalves announced the election date the following day as Dec. 13 and said he had called Eustace’s bluff.

The Office of the Prime Minister later circulated to the media a copy of Gonsalves’ election date announcement speech in which the election date was given as Dec. 15.

A photograph taken by a freelance photographer showed that Gonsalves had written the election date as “Monday December 15”. Dec. 15, 2010 was a Wednesday.

5 replies on “Will Gonsalves call elections before Argyle Airport is complete?”