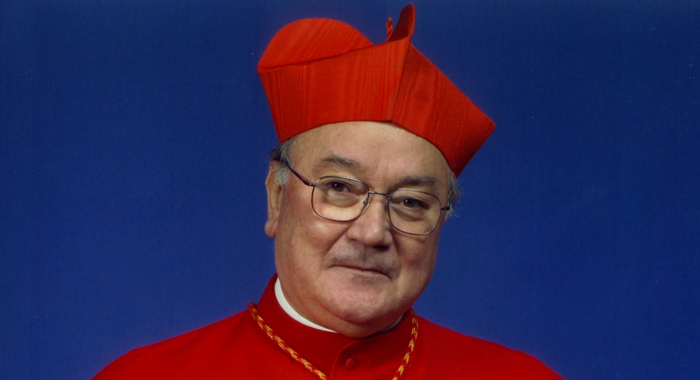 A high-level delegation from the Catholic Church, including the Most Eminent Cardinal Grand Prior Renato Raffaele Martino will meet with Governor General Sir Frederick Ballantyne, Prime Minister Ralph Gonsalves, and Leader of the Opposition Arnhim Eustace during a two-visit to this country this week.

The delegation will arrive in St. Vincent at noon on Thursday, where they will be met by Deputy Prime Minister Girlyn Miguel, Cabinet Secretary Kattian Barnwell, Permanent Secretary in the Ministry of Foreign Affairs Nathaniel Williams, and Bishop Jason Gordon of the Catholic Church.

Later Thursday afternoon, they will pay separate courtesy calls on the Governor General and Prime Minsiter, before the cardinal celebrates mass at the Cathedral of the Assumption, Kingstown, from 6 to 7:15 p.m.

On Friday, the delegation will pay a courtesy call on the Leader of the Opposition, then visit St. Mary’s Roman Catholic School and the Verbeke Centre in Kingstown. Verbeke Centre, which hosted Grade 6 of the school until it was destroyed by fire last month.

The delegation will also visit the St. Martin’s Secondary School, the School for Children with Special Needs in Kingstown and St. Benedict’s Children Home, in Georgetown.

They will take part in a sightseeing tour on Friday afternoon then attend a cocktail/reception at the Official Residence of the Prime Minister Friday evening.

Martino was appointed Cardinal Protodeacon by Pope Francis on the occasion of the Ordinary Public Consistory for the canonization of the some of the blessed.

It is the Cardinal Proto-Deacon’s duty, among other tasks, of announcing the outcome of the election of the Roman Pontiff.