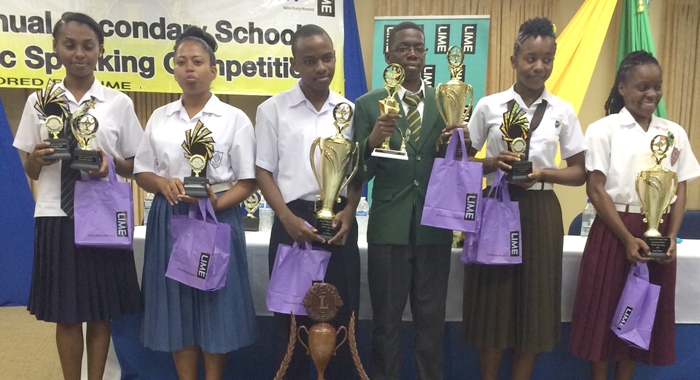 The finalists in this year’s public speaking competition.

Leslie Jack, general manager of telecommunications LIME, has reiterated his company’s commitment to sponsoring the annual Secondary School Public Speaking Competition, which was held on Oct. 22.

“The presentations made by the students, the main topic, prepared speech and impromptu, show that they take the event very serious and have worked hard to give of their best for the competition.

Jack congratulated all the winners, especially Mountain View Academy, which won the competition for the first time.

“We at LIME would like all concerned to know that we are very proud to be a part of this event, which shows that St Vincent and the Grenadines’ future is in safe hands, as long as we continue to provide the right avenues for our students to excel,” he said.

Apart from the prizes won on the night, LIME has committed to work along with the winning school in support of a developmental project that the institution would undertake, at a cost of $2,500.

“LIME is happy to endorse this undertaking, and looks forward to support the school outside of the public speaking competition.

“We want to show that after the end of the programme, LIME is still working to expand the capacity of the students who participated,” Jack said.

Eric February, the winner of the competition, earned himself a two-year, $1,500, scholarship towards his tertiary education, along with a LIME 4G ready android smartphone and data, and a room makeover through collaborations with Fine Things.