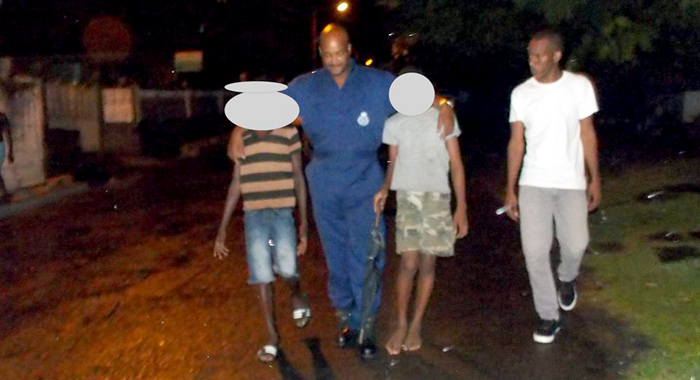 Fire fighters escort two of the boys from the scene. (Photo: Ashford Peters/Facebook)

Fire fighters rescued a boy from the roof of the Nurses Hostel in Stoney Ground Tuesday night after he became stuck there.

It is not clear why the boy was on the roof of the two-storey building, but two other boys who reportedly helped him to climb unto the roof are said to have told onlookers that they were trying to catch pigeons.

However, some persons have speculated that the boys, who are said to be between ages 9 and 12, were trying to burglarize the building.

One person told I-Witness News that they were alerted to the development by a commotion as they drove into Kingstown sometime before 9 p.m.

“When we inquired, we were told that apparently two of the boy’s other friends [had] helped him get on top of the roof [and] he couldn’t come down. He started crying when persons found out,” the witness said.

I-Witness News was told that the boy began to slip off the foot of the building as rain began to fall.

“Persons were shouting to him to stay there, telling him help is coming,” the witness said.

“And folks were saying, ‘Yo’ want mummy now?’. One guy who drove across was saying, ‘Jump off. Who send you up there?’” the witness told I-Witness News.

“Some persons were shouting to the boy to stay there when he said he was slipping. They even told him go on the centre piece of the galvanize and he was crying, ‘Me want mummy’,” the witness said.

A fire truck is said to have arrived sometime after but had to return to the Fire Department in Kingstown to collect a ladder.

Fire fighters later used a ladder to remove the boy from the roof of the building and escorted the three of them from the scene.