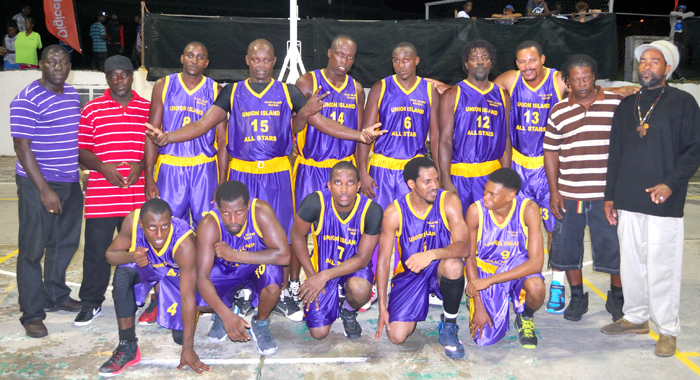 Union Island All-Stars defeated Bequia All-Stars by 5 points to hold on to the Digicel Grenadines Basketball Championship, which concluded in Bequia last weekend.

Bequia All-Stars went down as much as 15 points in the second quarter but rallied back to bring the score to a 30 to 38 margin at half time, and tying the game in the 4th quarter with 45 seconds left on the clock.

Missed free throw opportunities was the deciding factor as Bequia came close, but victory eluded them once again.

The competition began on October 24th in Ashton, Union Island, and games were also played in Canouan on Oct. 31 to Nov. 2, and concluding in Bequia last weekend, with the semi-finals, finals, and trophy presentation.

National point guard Steveon Taylor of Union Island was awarded the tournament Most Valuable Player and received many other trophies including MVP for his team, Final Game MVP, most assists, and most steals in six games.

Canouan Islanders defeated the Mayreau Kings in the third place game, with veteran captain Damian Harry of Canouan being adjudged Team MVP, as well as receiving the most points trophy with 147 in 6 games.

Centre Orando Blugh of the Bequia All-Stars received his team’s MVP and Warrican Myers of Canouan was awarded most blocks and most rebounds. Owen Isaacs of Mayreau was adjudged his team’s MVP.

The tournament, which first began in 2003, gives the talented elite players of the Grenadines an opportunity to display their skills and to compete at a high level of competition, as well as sustaining healthy sporting rivalries between the islands.

The technical aspects of the games and administration are handled by Sabrina Mitchell and the Bequia Basketball Association, with assistance from Rohan Henry, president of the Canouan Association, and Roseman Adams, president of the Southern Grenadines Basketball Championship. Both Parliamentary representatives of the Northern and Southern Grenadines, Loraine Friday and Terrence Ollivierre, attended the finals and spoke at the conclusion of the event.

Both representatives congratulated the winning team, commended the organisers of the competition and thanked the sponsors for their commitment to basketball in the Grenadines.

Friday and Ollivierre thanked Mitchell for her efforts to organize the competition.

Ollivierre challenged Bequia to bring better competition for Union Island, who have won the competition more than any other team since the inception. He also commended Mayreau on their stellar efforts despite being short of a few members.

Friday commended the Bequia team for their success in reducing the margin of victory and providing an exciting conclusion.

Mitchell, president of the Bequia Association, thanked the sponsors and administrators Henry and Adams and his support team Danis Coy, Philmon Taylor and Seymour LaBorde. She specifically expressed gratitude to Canouan for their efforts to help fund the very expensive tournament, which involves covering the cost of the boat transportation and house rental for some 80 persons over a two and a half week period. She concluded challenged the other basketball associations in the Grenadines to develop their under-15 players, as Bequia has done in the past 10 years to ensure sustainability of basketball in the Grenadines, but also with the hope of having a Under-15 Grenadines youth championship in the not too distant future.