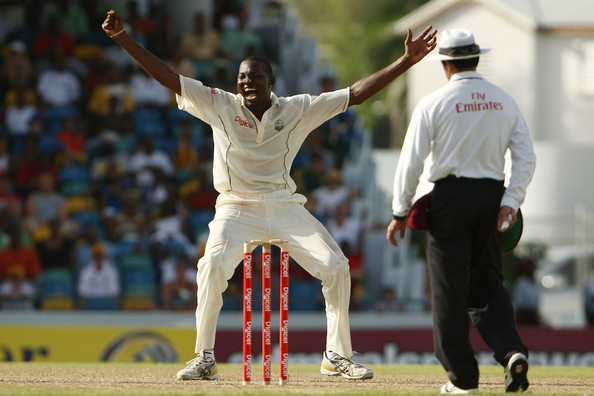 Suleiman Big Benn is the lone spinner on the team.

The West Indies squad for the tour of South Africa was eagerly anticipated following rumours and speculation on the back of the team’s aborted tour of India.

Reports were that none of the players who were in contractual dispute with the West Indies Cricket Board (WICB) would have been selected, but on Wednesday evening when the test team was announced, it more or less contained some predictable names.

The team, which is being captained Denesh Ramdhin, sees the return of big hitting opener, Chris Gayle, who was absent from the ill-fated Indian tour because of injury.

Barbados’ beanpole left-arm spinner Suleiman Benn is the lone spinner, with mystery Sunil Narine currently undergoing remedial work on his action. Narine, who is among the top spin bowlers in the world, was banned from bowling by the ICC after having his action reported in the World T20 Club championship in September.

Benn, who was out of favour with regional selectors for more than four years, was recalled for the Bangladesh Series after Ramdhin replaced Darren Sammy as captain. The other spinner who has featured highly in the West Indies test setup, Dominica’s Shane Shillingford, is said to have lost his effectiveness after being banned by the ICC from bowling his doosra in December last year.

The pacemen include a rejuvenated Jerome Taylor, who, following a loss of form, has returned and has quickly regained his confidence to add verve to the attack. The ever-present and pacey Kemar Roach, the fast improving Jason Holder, the muscle-bound Shannon Gabriel, and the nippy Jamaica Defence Force member Sheldon Cottrell whose left-arm genuine pace lend variety to the attack.

in addition to Gayle, the batting sees the experience Shiv Chanderpaul, the explosive Marlon Samuels, young opener Kraigg Brathwaite, the talented trio of Darren Bravo, Leon Johnson and Jermaine Blackwood expected to answer the call for runs. Blackwood is expected to provide some help with his uncomplicated but so far effective offspin.

Ramdhin and Chadwick Walton are the men charged with doing the work behind the stumps.

The West Indies will oppose the South Africans in three Test matches prior to going into ODI’S and T20’s.

Chairman of Selectors Clive Lloyd in his comments to Windies Media said, “Of course at all times the Selection Panel aims to select the best and strongest team available. We look forward to this squad giving a good account of themselves for the three Tests in South Africa.

“There is a significant amount of international cricket to be played over the next six months, including Test matches against some of the higher ranked teams in world cricket and as such it would be critical for the squad to get off on a positive note in South Africa,” Lloyd added.

“Specifically we have selected young fast bowler Sheldon Cottrell who is a good prospect. The Selection Panel is looking to introduce players such as Cottrell who can contribute in moving West Indies cricket forward,” Lloyd explained.

All players selected have been notified of their selection and that their selection is contingent upon their signing of the Match Tour Contract, which was sent to each player selected on Tuesday.

The deadline for the return of signed Match Tour Contracts to the WICB is 5 p.m. (ECT) next Tuesday, Nove. 18.

The West Indies Test Squad is scheduled to depart the Caribbean on Nov. 30.