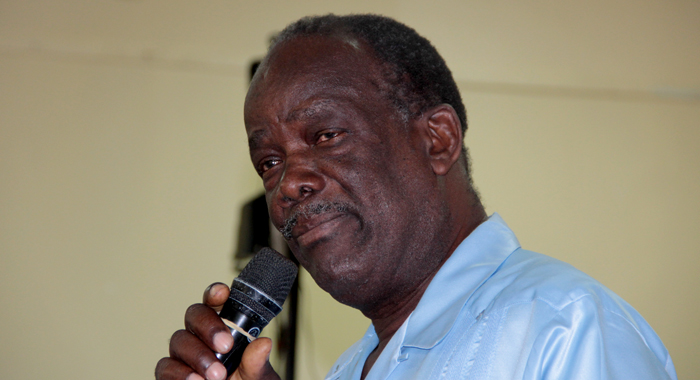 A matter like this frightens me as a manufacturer.” — OT Mayers. (IWN photo)

Businessman Omroy Theophilus “O.T.” Mayers, founder of Finishing and Furnishing, says he is frightened by the protracted impasse, in which fellow entrepreneur Leon “Bigger Big” Samuel has failed to have his licence to mine aggregates on lands he (Samuel) owns at Rabacca reinstated since 2011.

He further suggested that envy was at the heart of the development, which has also lead to the closure of Samuel’s block-making plant.

State officials say Samuel licence was withdrawn because of violation of the terms of his contract, and environmental impact, namely an oil spill contaminating ground water.

Samuel’s technical team has have strongly denied these allegations.

On October 2, Samuel received what he thought was a licence to recommence mining. However, about five days later, he received another communication from the government, saying that the licence is subject to  Cabinet approval. (Scroll for video from October 2014 )

“A matter like this frightens me as a manufacturer. It frightens me a lot because I am a furniture manufacturer. I deal with chemicals, I deal with dust and all kind of thing, and I don’t know when I will offend the environmentalists. I just don’t know,” Mayers said Wednesday at an event in Kingstown, where Samuel and his technical team detailed the timeline of the development and responded to state authorities’ charges.

Mayers noted Samuel’s nickname, “Bigger Bigs”, adding, “He has a very good name, Bigger Bigs. You are real big, my friend. That’s why you become a target.”

Mayers, who like Samuel is a self-made businessman, said he got close to Samuel when Samuel opened his block-making plant in Yambou.

“He made a statement that I … totally agree with. He said when you take a chance, take a chance that nobody else can take, will ever venture to take. And he took that chance and from that time I hear that statement I was close to him and I get closer to him,” Mayers said.

“This issue now, to all right-thinking Vincentians, is a frightening one,” Mayers said.

He said that when Samuel was ordered to close his mining operation, he (Mayers) visited the mining plant.

“And seeing is believing, and touching is the naked truth. I went with my naked eye,” Mayers said.

“Something is happening in St. Vincent. We have a lot of mouth and most of the people who mouthing off is not mouthing off intelligently, because they don’t know what they talking about. They don’t go and see anything. But they hear and they start to mouth off.

“And eye saw a big company – I can’t remember the name – but the they have a generator and eye saw when they change the oil from the generator, there is an earthen drain, a gutter, running the oil straight in the little water that is there,” Mayers said.

“And eye see oil running in the water. I come back again, I don’t know who do it, but eye see them burning tyres in the vicinity, in the river there. And I go by Bigger Bigs, every machine some of you garage have more oil than what eye saw on Bigger Bigs’ operation — because some of us car drip oils at night, and that is expected,” Mayers said.

He said Samuel had two drums of fuel, adding that the most skilled of person might spill fuel even when using a large funnel.

“So, I say if there were any offenders, Bigger Bigs was the least offender,” Mayers said.

Mayers, who is also a preacher, turned to a Bible story to illustrate his next point.

“And when I say nothing new under the sun, I remember Ahab and Jezebel. I remember where the war start[ed]; is Naboth vineyard they were fighting over,” he said.

Mayers said he could support what he was saying with “the blueprint that is given to us to live by.

“I don’t know who Bigger Bigs’ land is close to, but I could also say who owns every square inch of land in St. Vincent. That’s what they say, so I could say so,” Mayers said.

“Anyhow, it was not really Ahab who engineered this thing. It was his wife Jezebel. So what is really happening at time, the people who really want the thing done, they don’t do it with their hands, they get somebody else to do it.

He, however, told the audience, that while he appreciated the applause, the first time he spoke at the venue (Methodist Church Hall, Kingstown), persons began to applaud and laugh as soon as he took the microphone, and he was subsequently described as a “comedy” (comedian) because of this.

“Well, don’t threat me like a comedy today, because I am inspired to say what I am saying. Envy is as cruel as grave. That’s all. Ah stop,” Mayers said.