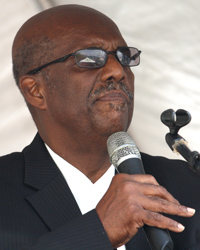 Opposition Leader Arnhim Eustace has described as “unsavory developments” the situation in Guyana, where President Donald Ramotar has prorogued Parliament to block a motion of no confidence in his government.

Ramotar has justified the decision saying he had earlier indicated a desire for the National Assembly, in its post-recess sittings, to deliberate and give priority to important matters relating to the development of the country.

But Eustace said in a statement that the regional integration grouping, CARICOM has not commented on the development, as had been the case when the opposition in St. Kitts and Nevis failed for two years to have a similar motion debated in Basseterre.

“We in the New Democratic Party of St. Vincent and the Grenadines have protested vigorously against the action taken by the government of St. Kitts and Nevis. Many CARICOM governments have maintained a stony silence on this matter and silence gives consent,” Eustace said.

“We now take note of the unsavory developments in Guyana where parliament has been prorogued to block a no confidence motion brought by the Opposition in that country. In the same way that our party unequivocally condemns the actions of the government of St Kitts Nevis we do likewise to the government of Guyana,” he said, adding “their actions are contemptible and an affront to democratic principles”.

Eustace said in the case of Guyana, the Organization of American States (OAS) has condemned the development in Georgetown and the NDP welcomes the condemnation.

“But why treat St Kitts Nevis differently? To date I know of no OAS intervention or condemnation of the actions of the government in St Kitts Nevis.

“We in this region must speak out on this issue in the interest of parliamentary democracy. Will our sister CARICOM countries continue to maintain their silence?” Eustace said.

7 replies on “Eustace comments on political situation in Guyana”