HLDC clients paying mortgage and rent while waiting for houses 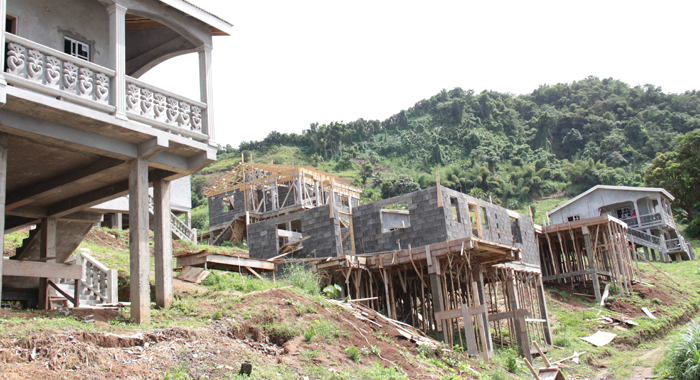 The houses at Green Hill are at various stages of completion, and some of them have not been worked on for weeks. (IWN photo)

Some clients of the Housing and Land Development Corporation (HLDC) are doubtful that the state-owned company will complete their houses in Green Hill by month end, four months later than scheduled.

In the meantime, the homeowners are finding it very difficult to meet their financial obligations as they are being forced to pay rent, in addition to the mortgage on the houses that they are yet to occupy.

“Mr. Charles, my landlord is waiting. Do you understand what I have to say? Today or tomorrow, [If] I am kicked out in the street, where do I have to go? Where does my child have to sleep? It is not my fault that I am still living in the people’s rent house. It is the fault of HLDC,” one woman told General Manager of the HLDC, Elvis Charles, in a meeting last week.

“You are living somewhere, you have to pay rent, you are paying interest, then the banks are charging you based on the timeframe that you gave, and you did not meet that deadline, then they start taking mortgage; nobody is saying to you well, ‘Okay, we are going to extend,” another woman said in the closed door meeting, a recording of which was obtained by I-Witness News.

“I informed my landlord ahead of time that by the end of August we should be out of their property.  Since then, I have packed up my entire house. I am living now out of boxes and barrels. … We are sleeping in the living room on the floor on mattresses. … My rent and my interest payments are equal at this point in time,” one man told the meeting.

“I have not been able to pay my interest payments for the last couple of months. My interest right now is backed up — $3,285.50. I know the figure because I look at it every day mounting up,” the man further said at the meeting, which was also attended by chair of the HLDC board of directors, Beresford Phillips.

Some homeowners complained that they were supposed to move into their houses in August, but those homes remain incomplete.

I-Witness News visited the site on Sunday, and saw houses at various stages of construction, including several where the ground floor was yet to be cast in concrete.

And while Charles told the meeting that workers were trying to paint some of the houses as soon as possible, Phillips could not tell seven clients, whose houses were least advanced, when they could expect their houses to be complete.

Charles told the meeting that the HLDC was dealing with the government to finish purchasing of material to complete the houses.

The houses are being built under the government’s housing initiative, and would-be homeowners negotiate mortgages and disburse the money to the HLDC, which then builds the houses.

Charles explained that the state-owned Central Water and Sewerage Authority (CWSA) has advised the HLDC that it will not be able to connect water to that section of the housing development until January.

He, however, said he told the CWSA that the HLDC would like homeowners to move in by Christmas.

In the meantime, Phillips is suggesting that the HLDC provide the homeowners with water tanks.

“Because Water Authority made it clear that they are unable to do the work before next year January,” he said.

He explained that the CWSA has said that it has used all of its pipes at Argyle International Airport, which is expected to be “substantially complete” by the end of this year.

But while the HLDC officials were talking about the painting of houses and the installation of water tanks, a female at the meeting said she wished her house were so far advanced.

“Because right now, all I am seeing is columns and dirt,” she said, adding that he house was one of seven at this phase of construction.

“Nothing has been done for weeks. The columns went up and that was it,” another female told the meeting in reference to the seven houses.

Charles said that it will be “impossible” for those houses to be finished by the end of the month.

He told the meeting that the HLDC has met with contractors, paid them, and bought cement and steel to cast the floor of the seven houses.

But a female at the meeting noted that the contract homeowners have with the HLDC says that the house will be constructed within six to nine months.

She said that while she understands that there will be unforeseen developments, it is also reasonable to expect “ decency and courtesy” from the HLDC.

“No one has said anything to us,” she said, suggesting that the HLDC should be frank about when completion is expected.

She said that the HLDC met with homeowners recently and she was not informed.

HLDC ‘hurrying to get things in place?’

Another woman accused Charles of giving the impression that the HLDC ought to be commended for trying.

“That is always the attitude,” she said, and went on to ask if the HLDC was not supposed to make provisions for electricity and water when they first decided to build houses at the area, where other houses have been built in the past under the same programme.

“Why only now you are hurrying to get things in place?” the woman asked.

“[It’s] not that we are hurrying to get things as if they were never done,” Charles responded, adding that the HLDC has been in “constant negotiations and discussions” with CWSA and the state-owned power company, VINLEC.

Charles said that the HLDC wrote the CWSA early regarding the water connection, but pointed out that writing does not mean that the connections will be done immediately.

But homeowners asked why should they believe, in light of the long delay, that the water connections will be made by January.

“… because that’s what they said,” Charles responded, adding that the CWSA has said the connection can’t be made until January because they have run out of water pipes.

“Do you know how many corners I have to cut just to try and survive? Every time people come here, we are just being filled up with empty promises,” a woman responded.

“And when it comes to your children, you can’t cut corners,” another woman chimed in.

“It’s as if the HLDC should be applauded for everything that they are trying to do and we should be grateful for it. I am not going to hide my emotions anymore. I am upset; I am absolutely upset. Every time you are called to this building, it is to receive bad news. It is never to say that for surety this is what is going to happen. ‘We are trying to see if’,” she said.

“Almost three months ago, my house had one window. Today, it still has one window; no balusters. I don’t know what is going on because nothing has been done. I am wondering if I am going to get my house with the next seven who are started… I am already paying a thousand plus,” she said.

A man told the meeting that he is trying to be calm as he understands that the resources of the HLDC were stretched after the Christmas Eve flood last year.

But he noted that homeowners were told that their houses will be finished by the end of July.

He said that every time he visits the house, he concludes that it will not be finished when the HLDC says it will be.

“I can live with that. My wife is a hothead; she can’t live with that, and that is why she is not in the meeting, because, had she been here, it would have been a totally different thing.”

He told the meeting that at a meeting on Sept. 25, the HLDC said the house would have been completed in three weeks.

“In that meeting, the HLDC said it would see how comfortable it can make homeowners, because it realise that they are paying both rent and mortgage.”

The man said that because he works at a financial institution, he gets “a little leniency in terms of I could decide not to pay my interest and I could pay my rent…

“I have that leeway, but that is not the same for other homeowners. What will happen, as soon as their salaries go in, the bank will take their money. So most of them will be backlogging on their money,” he said.

Phillips told the meeting that he is  “upset” with the CWSA, and while the HLDC has no control over the situation, it is accountable to the homeowners.

“I am feeling it for you, and I am committed, once I am involved, to finding solutions to the problems,” the HLDC chair said.

Phillips further said he will not duck the issue of compensation.

“I am not a person who duck and run from things. I will tell you it is still heavily on the agenda,” he said, but added that the HLDC board did not complete its discussion of the issue at its last meeting.

“I understand you are paying a mortgage, … and to pay rent. You would have budgeted yourself based on your expectations. Because obviously, you would expect us to deal with your situation in a particular way, based on the contract…

“Again, I, on behalf of the Corporation, I’d like to apologise,” Phillips said.