State employees accused of lying to shut down businessman 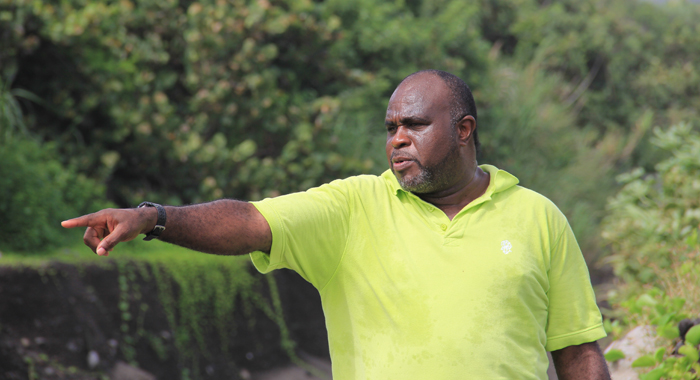 Businessman Leon “Bigger Bigs” Samuel makes a point on the banks of the Lady Jane River on Oct. 4, 2014. (IWN photo)

A group of professionals has rebutted the reasons the government gave for revoking businessman Leon “Bigger Bigs” Samuel’s licence to mine aggregate at Rabacca in 2011, suggesting that state-employed professionals prostituted themselves in the matter.

“The technical staff obviously was directed to write what they wrote. Because, I have said before, if you go through the points, they were patently false,” engineer Glenford Stewart told a press conference last week.

“Why would the technical staff print something that is false? Any qualified technical mind should have some level of independence of intellect and no technical person — let’s take the simplest case — would say that you have ponding at Rabacca where Bigger was minding, because it is impossible. So why would you put that in, why would you throw that in?” he said, adding that there was also no mining along the banks of the Rabacca or Lady Jane Rivers

The press briefing was the latest in Samuel’s attempts to have the licence reinstated.

Cabinet had revoked the licence, charging environmental impact and violation of the terms of the agreement, allegations that Stewart contested at last week’s press briefing, while Isaacs noted that the law does not provide for Cabinet approval.

“It is interesting to note that all the allegation which were made again Bigger Trucking and Construction Company on the operation of the site were patently false,” Stewart said.

He said that while Samuel’s company — Bigger Trucking & Block Construction Company — was accused of causing petrochemical’s to leak into the ground water, stocks of fuels were never kept on the site.

He said his company concluded that 2.4 gallons of diesel was spilled over a two year.

“Anyone can go to Rabacca now, investigate and examine who is operating there now and see the level of spillage that is taking place — far more than could ever have been undertaken by Bigger Bigs,” Stewart said.

“Furthermore, there is no evidence that spilled oils had gained access on the ground water table through the sand and gravel to a depth of 50 feet.”

He said that no mining was carried out, or was contemplated along the Lady Jane River, contrary to the accusation of the government.

“The evidence will show that state operators mine within the Lady Jane River, and we have photographs to establish that,” Stewart said.

He spoke of the steps that the notice to stop mining at Rabacca had ordered Samuel to take, including back-filling an area to   eliminate ponding.

“This was really a joke. Technically, and even from a common sense point-of-view, a five-year-old child is seized with the knowledge, on the basis of evidence, that you can’t have ponding in sand or gravel. There was no ponding of storm water ever on the site. Ponding is not possible given the permeability of the natural sand and gravel overburden,” he said of the area.

“I cannot imagine that anyone seized with any level of technical competence would have advised the minister responsible for mining to close the operations down on the basis of what is contained in this statutory order,” Stewart told the press conference.

Bishop supported this position, saying that the claim of ponding is “totally false”.

“It is not possible, technically. Why that is there, I can’t really say. But I am saying, from a technical standpoint, ponding on this soil type is impossible,” he explained.

Samuel had purchased some five acres of land in the area, which has rivers as boundaries on two sides.

He has said that in keeping with the law, the natural movements of the rivers have doubled the size of the land that he owns, a claim that the government has challenged.

But Isaacs and Stewart said that Samuel’s interpretation of the law is correct and is an established legal principle.

“It is a technical matter. If you are boundary by a river, or two boundaries, as is the case of Mr. Bigger Bigs, you’ve bought the land, if the river comes down and the river takes potions of the land, you have lost it. If, in its natural process, it deposits … whatever is in between is your. It is simple, and it is not just us saying so. It is documented as a procedure that is legal,” Isaacs explained.

“Land law speaks to that. We are governed by laws,” Stewart said of the doctrine of accretion and attrition.

Steward noted that Samuel has fixed boundaries on the east and west and moveable boundaries in the Rabacca River and Lady Jane on the north and south.

“It is an established fact, it is law. … If the river diverts and gives you more land, what it gives you is yours. Which law in our civilization will deny you that fact? It is on our law books,” he said.

A condition of the “approval” given to Samuel on Oct. 2 was that a road through his property — which he says is private but the government maintains is public — must remain open.

Stewart said the state is afforded certain mechanisms by way of entering private property and acquiring it.

“The state has the power, but there is a procedure. The state must follow by way of law,” he said.

“If you decide to come on my property and say I want that portion of land to use as a road for public purpose, first you must give me notice of your intent, secondly, you must either lease that portion of land, or buy it. What’s the problem with that? It’s such a simple case,” Stewart said.

On the matter of requiring Cabinet approval for the mining licence,

Isaacs pointed out that the Town and Country Planning Act does not provide for Cabinet to approve applications.

“So, it is plain in the analysis, for everyone to see, that there is something amiss in this issue. The company does not lose heart, and we are quoting from the apostle Paul in second Corinthians chapter 4 and verse 2, it says, ‘Rather, we have renounced secret and shameful ways; we do not use deception, nor do we distort the word of God. On the contrary, by setting forth the truth plainly we commend ourselves to everyone’s conscience in the sight of God,’” Isaacs said.