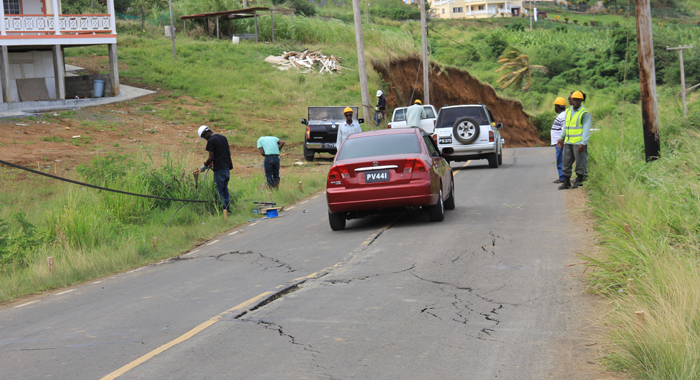 Vehicles drive along the Argyle main road on Saturday, where cracks began to appear on Friday. (IWN photo)

Officials from the Ministry of Transport and Works were late Saturday afternoon devising a response to an earth movement along the main road outside of the construction site of the Argyle International Airport.

Cracks that appeared in the area, including along and across the road, had worsened overnight, causing utility companies to relocate their infrastructure to the side of the road furthest away from the boundary with the airport.

Chief Engineer Brent Bailey told I-Witness News around 5 p.m. that he was on site and would be better positioned to brief the media on the response later Saturday evening.

Workers from electricity provider, VINLEC, along with their counterparts from telecommunication providers LIME and FLOW were on site Saturday morning to relocate their infrastructure, as VINLEC moved its poles to the opposite site of the road.

General Manager of the Central Water and Sewerage Authority, Garth Saunders, along with staff from the engineering and other departments of the company, also visited to inspect and prepare for the possible relocation of the water pipes in the area.

The road remained open to vehicular and pedestrian traffic, but an engineer told I-Witness News that officials may have to consider a diversion in the area, to relieve stress on the earth.

The engineer said that the earth movement could be worsened by rain.