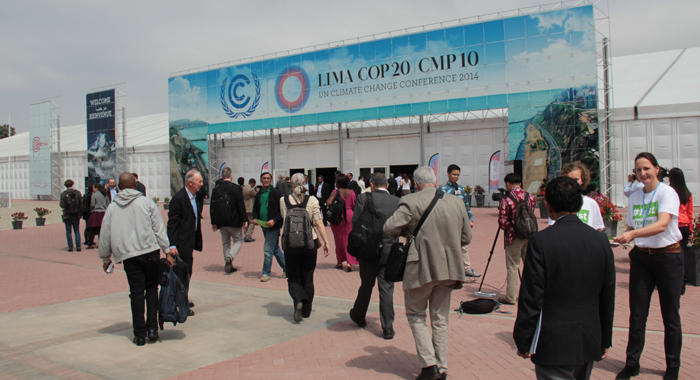 LIMA, Peru (CMC) — The annual world climate change talks opened here on Monday with Caribbean Community (CARICOM) countries cautiously optimistic that developed countries will commit to the type of financing that poor, vulnerable nations like theirs need to adapt to climate change.

The summit brings together representatives from 194 countries to negotiate over the next 12 days the legally binding text that will become next year’s Paris Protocol.

The 20th session of the Conference of the Parties (COP) and the 10th session of the COP serving as the Meeting of the Parties to the Kyoto Protocol will provide an early insight into what may be expected from the agreement regarding the long-term phase-out of coal-fired power plants, the rate of deployment of renewable energies, and the financial and technological support for the vulnerable and least developed countries, such as those in the Caribbean.

Executive Secretary of the UN Climate Convention, Christiana Figueres, said never before have the risks of climate change been so obvious and the impacts so visible.

“Never before have we seen such a desire at all levels of society to take climate action. Never before has society had all the smart policy and technology resources to curb greenhouse gas emissions and build resilience.

“All of this means we can be confident we will have a productive meeting in Lima, which will lead to an effective outcome in Paris next year,” she added.

But ahead of the talks, St. Vincent and the Grenadines Prime Minister Dr. Ralph Gonsalves, whose country was impacted by unseasonal heavy rains that destroyed 17 per cent of the nation’s gross domestic product (GDP) last Christmas Eve, said he is hoping that the talks will not end in failure like the Copenhagen meeting of 2009.

“I would say maybe a little more optimistic than Copenhagen, but it is still a difficult hill to climb. It is a difficult hill with the developed countries as to what they will bring to the table, and then between themselves and say China and India, which are always problems,” Gonsalves told the Caribbean Media Corporation (CMC) recently.

Gonsalves’ comments highlight the complicated nature of the negotiations as countries form themselves into converging blocks that at times contain vastly different economic circumstances.

But they also speak to the politics in home capitals that determine what negotiator can bring to the table.

In November, US President Barack Obama pledged a maximum of US$3 billion over the next four years to help poor countries invest in clean energy and cope with rising seas and extreme weather.

Gonsalves congratulated Obama and the G20 for seeking to advance the discussion on climate change, “even though where he is pushing it is nowhere near where we want that discussion to go.

“He had to take some people at the G20 to that stage kicking and screaming, resulting in a dilution of the working of the communiqué,” Gonsalves told the opening of CARICOM Energy Week last month.

Like their other Small Island Development States (SIDS) partners, CARICOM countries are hoping that rich countries will over the next 12 days commit to financing poorer nation’s adaptation to climate change.

SIDS have borne the brunt of the effects of climate change, even as their contribution to the phenomenon has been negligible.

In the Caribbean, several countries have this year battled with too little or too much rain, which has destroyed infrastructure, curtailed economic growth and development, and threatened food security.

Jamaica has had several months of drought, affecting the most important food production parishes in the country and resulting in billions of dollars in losses in agriculture in a country whose annual US$997.5 million food import bill is the largest slice (21 per cent) of CARICOM’s US$4.75 billion in annual import of food from outside the region.

“Jamaica needs the support of the global community if we are to ensure that the country can grow and provide its people with a decent way of life, in keeping with the goals and objectives of Vision 2030 National Development Plan which envisages Jamaica as ‘the place of choice to live, work’ raise families and do business,” Robert Pickersgill, the Minister of Water, Land, Environment & Climate Change said at a national consultation ahead of the Lima talks.

“The concern is that as the climate change implications are extended for several years that these kinds of situations are going to become more and more extreme, (such as) greater floods with periods of extreme drought,” Judith Wedderburn, Jamaica project director at the non-profit German political foundation Friedrich-Ebert-Stiftung (FES), told the same gathering in Kingstown in November.

And that same extreme heat experienced in Jamaica and other parts of the Caribbean is putting the region’s small ruminants and fish stock at risk, threatening important protein sources, says Norman Gibson, a livestock scientist with the Caribbean Agricultural Research and Development Institute (CARDI).

At the same time, some countries, such as Barbados, St. Lucia and St. Vincent and the Grenadines, have had to respond to flooding and/or droughts this year.

These extreme weather events are occurring at a time when Guyana-based CARICOM Secretariat has identified economic resilience and climate resilience as two central theme of the 2015-2015 strategic plan that it heads of government approved this year.

Gardener, speaking at the opening of CARICOM Energy, pointed to the reports of the Intergovernmental Panel on Climate Change (IPCC), which is composed of scientists from across the world and assesses the scientific, technical and socio-economic information relevant for the understanding of the risk of human-induced climate change.

“[The IPCC reports] and all other studies related to climate change have identified Caribbean Small Island developing states as countries that are most vulnerable to the effects of climate change,” Gardner said.

“The fact is that if it is that Caribbean countries, Small Island Developing States that we are, are to achieve sustainable development, then the issue of climate adaptation is one that must be pursued with vigour,” he said, noting that SIDS typically rely on the annual negotiations to provide the framework through which climate financing for adaptation is identified.

Gardner’s view on the commitment of rich countries, was similar to that of Gonsalves, one of CARICOM’s longest-serving prime minister among the current crop of leaders.

“… the paradigm which I want to share with you today is that the issue of adaptation is one which is going to be in large part self-funding, because those funds are not going to coming as fast as we expect them to and in the kinds of quantities in which we require them if we are going to make our countries sufficiently resilient,” Gardner said.

“There is going to be need for internal generation of cash to fund adaptation,” he further said, even as he identified the difficulties that CARICOM nations are having financing such adaptation.

“Where is that money going to come from internally when we all are countries that are broke, some of us with debt to GDP ratio of up to 150 per cent? It is going to come from sustainable growth. But the single biggest threat to sustainable growth in any of the Caribbean countries … is the cost of energy, the dependence on imported and expensive energy. We are all overly dependent, some more than other, except for Trinidad and Tobago, on imported, expensive energy,” he said.

This year’s climate negotiations come just three months, before the March 2015 deadline when each country must have tabled their national climate targets.

The international non-governmental environmental organisation, Greenpeace, said Sunday that it believes all countries should present concrete commitments for 2025 to accelerate the transformation towards 100 per cent renewable energy by 2050.

“These commitments need to be improved every five years to ensure both political accountability and technological development,” Greenpeace said.

Ahead of the talks, a panel overseeing the United Nations’ carbon market, headed by a Caribbean scientist, said that the governments already have a powerful tool in the Clean Development Mechanism (CDM) that they can now use to boost and broaden international cooperation to deal with climate change.

“We urge countries in Lima this year and in Paris next year to renew their commitment to the CDM,” said CDM Executive Board Chair, Hugh Sealy, an environmental scientist and chemical engineer from Barbados.

Sealy said that the CDM is one of the most effective instruments governments have created under the UN Climate Change Convention.

“It drives and encourages emission reductions, climate finance, technology transfer, capacity-building, sustainable development, and adaptation — everything that countries themselves are asking for from the new Paris agreement,” he added.