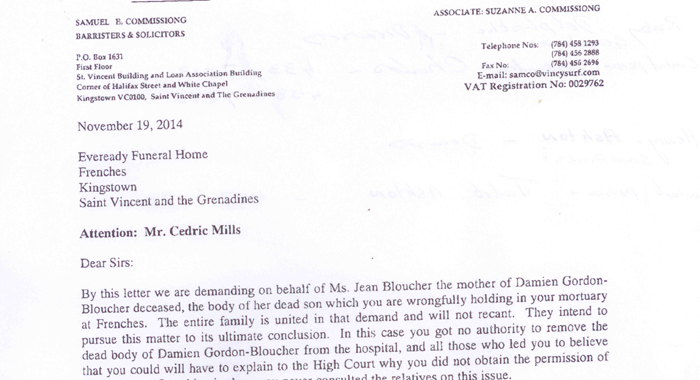 A lawyer earlier this month wrote to a local funeral home demanding that the body of murder victim Damien Gordon Bloucher be released to his mother, Jean Bloucher.

“By this letter, we are demanding on behalf of Ms. Jean Bloucher the mother of Damien Gordon Bloucher deceased, the body of her dead son which you are wrongfully holding in your mortuary at Frenches,” Samuel E. Commissiong wrote to Everready Funeral Home on Nov. 19.

“The entire family is united in that demand and will not recant. They intend to pursue this matter to its ultimate conclusion,” Commissiong wrote.

In the letter, which was sent to the attention of Cedric Mills, manager of the funeral home, Commissiong said the funeral parlour “got no authority to remove the dead body of Damien Gordon Bloucher from the hospital, and all those who led you to believe that you could will have to explain to the High Court why you did not obtain the permission of the relatives.

“One thing is clear, you never consulted the relatives on this issues.

“Let us be clear. The fact that the mortuary is not functioning properly or at all does not entitle any one at the hospital to dictate to which funeral home the dead body should be transferred to, but both had a game plan.

“Let us be clear again. You will not be paid one cent even if you refuse to deliver the body, and you will be sued for its wrongful detention, thereby preventing the relatives from burying their dead. Maybe you will like to take independent legal advice on this matter,” the lawyer wrote.

He told the funeral home that if the body was not handed over to the deceased man’s relatives by noon on Nov. 19, litigation would have started, at the expense of the funeral home.

I-Witness News was unsuccessful in its attempts to reach Mills at the funeral home or at a number supplied by his staff.

Ms Bloucher told I-Witness News last week that her son’s body was taken to the funeral after the autopsy was performed at Milton Cato Memorial Hospital.

She said that the family had preferred to have the funeral arrangements done by New Haven Funeral Home.

However, staff from Everready Funeral Home, with which the government has a contract for the transportation (and at times storage) of bodies in the custody of the state, took Bloucher’s body to the funeral home after the autopsy.

She said that Everready Funeral was requesting payment or certain services, but released the body, without payment, after receiving the letter from the lawyer.

He was one of three men killed in separate incidents within a 15-hour period that weekend. (See video below)

He was buried on Saturday.