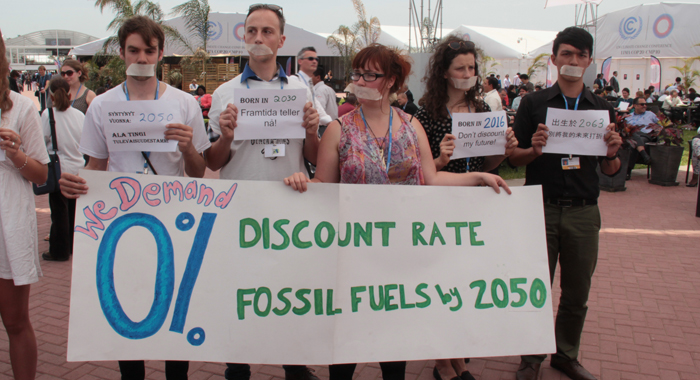 Activists demonstrate on the sidelines of the world climate change talks in Lima, Peru. (Photo: CMC/IWN)

LIMA, Peru, Dec 6, CMC — A Caribbean negotiator has welcomed a new report which says the cost of adapting to climate change in developing countries is likely to reach two to three times the previous estimates of US$70 billion to US$100 billion per year by 2050.

“There is a lot of low-balling of this issue of climate change, and so people toss out numbers saying, ‘Well, we need one billion dollars’, and one hundred billion sounds good and ostensibly will take care of what countries need to deal with the problem.

“And the Adaptation Gap Report goes a long way to show how little that is,” Jamaican negotiator Gerald Lindo told the Caribbean Media Corporation (CMC) after the release of the report on the sidelines of the United Nations climate change conference that ends here on December 12.

“I think the conversation needs to continue, but at least it is moving in the right direction. It is really showing how big the amount of adaptation we need to do is, and how difficult for countries like ours to keep up,” Lindo said.

The first-ever United Nations Environment Programme (UNEP) Adaptation Gap Report finds that, despite funding for adaptation to climate change by public sources reaching US$23 billion to US$26 billion in 2012-2013, there will be a significant funding gap after 2020 unless new and additional finance for adaptation is made available.

“Without further action on cutting greenhouse gas emissions, as outlined in UNEP’s Emissions Gap Report 2014, the cost of adaptation will soar even further as wider and more-extensive action is needed to protect communities from the intensifying impacts of climate change such as drought, floods and rising sea levels,” UNEP said in a statement on Friday.

Without early efforts to implement adaptation in these countries, the existing adaptation gap will widen as greater financial resources will need to be committed later on, according to the report.

The Adaptation Gap Report is the second major document over the last six weeks that has highlighted the impact of climate change on developing countries, such as those in the Caribbean.

Lindo told CMC that the Adaptation Gap Report puts the problem into even sharper focus after a report by the United Nation’s Inter-governmental Panel on Climate Change (IPCC) report released in November.

The IPCC report — the Fifth Assessment Report (AR5) — included estimates on the cost of adapting to climate change in developing countries of US$70 billion to US$100 billion per year by 2050 — based largely on World Bank figures from 2010.

The Adaptation Gap Report, produced in collaboration with 19 leading institutions and research centres, expands upon these earlier estimates by including new national and sector studies in its analyses and modelling.

“In that report (AR5), it says that we can adapt by so much and we can reduce the risk by certain amount. But what the IPCC probably didn’t do as much as they should have is talk about the limits of that adaptation, meaning the limits that they assumed were limits that dealt with biophysical limits, not necessarily limits that people would be able to accept as a society, not necessarily limit that people would be able to pay for themselves,” Lindo told CMC.

“And it just sort of blithely, in a sense, assume that people can adapt all these things and it is not as great a problem as it is. The Adaptation Gap Report is saying actually, no, if you look at it a little closer, you see how big the gap really is,” he said.

Barbadian Hugh Sealey, a lead negotiator for the Alliance of Small Island States, a negotiating bloc that includes the Caribbean, told CMC that the adaptation gap is “huge”.

“Some have estimated that it could be close to a trillion dollars a year that is required,” said Sealy, who heads the executive board of the Clean Development Mechanism (CDM), a panel overseeing the United Nations’ carbon market.

Sealey said that Caribbean negotiators are pleased that there has been an initial capitalisation of the Green Climate Fund of US$9.7 over the next four years.

“But we have a problem of how we are going to jump from that to what is really required,” he said, noting the shortfall between the US$9.7 billion and the US$100 billion per year by 2020 that developed countries have promised.

Sealy said it is not clear how much of that US$9.7 billion is grant or loan.

He, however, noted that developed countries have said that the US$9.7 billion is mobilized financed and not necessarily all from their national coffers.

“So are they expecting that the 9.7 billion dollars they put in will mobile further finance from the private sector? That’s the issue for us,” Sealy told CMC.

He said that the situation has implications for small island developing states that are vulnerable to climate change.

“I think we have to continue to emphasise that we are the most vulnerable countries and therefore we need a special window of access. We also have absorption capacity constraints within small islands, so I think that has to be recognised. There needs to be a pool of money that is set aside to increase our capacity to observe these funds, to be able to come with bankable projects on adaptation and mitigation,” he told CMC.

“I am not leaving mitigation [against the effects of climate change] out of this, because, as far as I am concerned, renewable energy for small island transforms our economies; it makes our economies more resilient and therefore allows us to adapt better,” he added.