‘People are firing bullets at us,’ opposition MP says 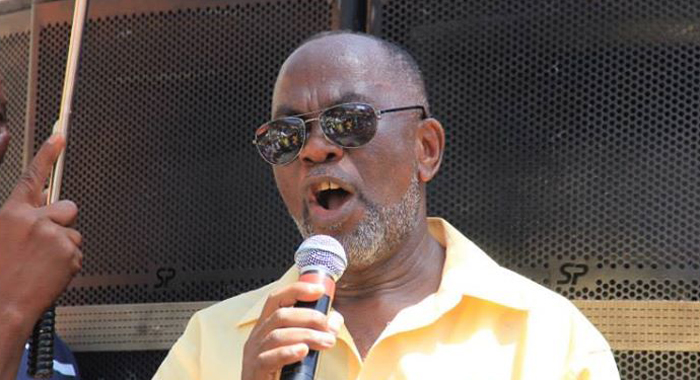 “There are people who are demonstrating on a daily basis they want to eliminate us, and they want to destroy us in the New Democratic Party. … People are firing bullets at us and you want to call it rain? I am not calling it rain.

“They want to take us out, and we must take warning and we must take a defensive position and an investigative position to protect our lives and our limbs and to secure a future for a better St. Vincent and the Grenadines. These are my firm and unapologetic positions,” Leacock said on his party’s radio programme on Monday.

Leacock was speaking in the wake of the death of former South Leeward council member of the ruling Unity Labour Party (ULP), 78-year-old retiree Edgar Cruickshank of Questelles, who died Saturday night after a car crashed into him and other persons at the NDP’s political meeting in Clare Valley.

Cruickshank had recently begun campaigning with Member of Parliament for South Leeward, opposition lawmaker Nigel Stephenson, and was attending his first political meeting with the party.

Leacock expressed condolences to Cruickshank’s family “and to say how sad I am at his passing, and that things could have happened so fast.

“And as time proceeds, a lot will unfold, and I will share my own conversations on matters leading up to today, with respect to Saturday’s incident,” said Leacock, who is one of two vice-presidents of the NDP.

Leacock said that he understands that in moderating the programme, host Clemroy Bert Francois wanted to give it a particular sense and directions.

“My formative training, Bert, is that of a soldier. And if I see people pelting bullets at me, I am not going to call it rain. I call it for what it is, and people are consistently doing things to hurt the New Democratic Party,” said Leacock, who attained the rank of major in the Cadet Force.

“Motor vehicle P 7516 collided with Cruickshank and other pedestrians at a public meeting in Clare Valley. Cruickshank succumbed to his injuries and was pronounced dead on arrival at the Milton Cato Memorial Hospital. Four other persons sustained serious injuries about their bodies and are patients at the Milton Cato Memorial Hospital,” the police said.

Witnesses, however, say that P7516 slammed into a parked vehicle, propelling it onto the hard court where the meeting was being held, and pinning Cruickshank and other persons underneath.

Five charges have since been brought against Anthony.

Related: 5 charges brought against driver of car that crashed into NDP meeting

“The direction in which that vehicle headed last Saturday evening, if no obstruction had stopped it, would have taken it straight onto the platform on which we, the speakers, were addressing that party (meeting),” Leacock said.

“In other words, those of us who were on that platform barely escaped a more tragic outcome on Saturday evening,” Leacock said.

Leacock said it has been proven that the light, horn, and brakes on the vehicle were functioning, and questioned the response of the driver after the incident.

“… the instinct of a person who gets into a collision or an obstruction, is to get out and put there hand on their head and bawl, ‘Lord help me. Sorry. Please. What happen to me coming here tonight?’ That would have been the spontaneous expression, one of sorry; not just to escape from a scene, to be apprehended.

“I call it what it is. I am among those who are going to count myself that an attempt was made to hurt the people of the New Democratic Party…” Leacock said.

“We have an election that is coming up. This government is going to lose this election hands down, … and it is not beyond the possible for people to do serious things that will hurt the outcome of this election. I am saying that and I am calling it out for what it is,” he further said.

Vincentians must vote by March 28, 2016 at the latest, but general elections are widely expected by December 2015.

He further said that the NDP cannot leave the investigation of the incident solely the Police Force.

“Already, if you listen to newscasts that’s coming out of 705 and utterances, much will be done to cover it up,” he said in reference to the state-owned radio station.

We have precedence,” Leacock said, noting that after Glenn Jackson, former press secretary to Prime Minister Ralph Gonsalves, was killed in 2006, Gonsalves said he was assassinated.

Francis “Prickle” Williams was charged with Jackson’s murder but the case against him was dismissed.

“We haven’t gone this far, neither am I encouraging it to go this far. But I am saying, on the basis of the evidence that is before me now, it was an attempt to hurt the people of the New Democratic Party, and we should not be naïve in our utterings and our people should call it out as they see it,” Leacock said.

Leacock, who was elected to office in 2010, said that he was not able to celebrate his election victory in Central Kingstown.

“Because all through the election, I had been warned, names had been called, criminal gangs had been identified, and people know the potential from which I could have been hurt.

He spoke of a recording of a man saying on radio “that if the Prime Minister gives him the instruction, that he will come and where he will put the bullet in St. Clair Leacock.

“… I have reported that to the Police Force. The tape is available,” Leacock said.

“I’ve had people walk up to me and say if I harass their prime minister how they will kill me and where they will shoot me. This is not a joking matter. Our life is on the line.

“I am not afraid and we will go forward, because of many of us who are injured, many others will come forward. And this is no time for political niceties … I am working in this vineyard every day and I know what we are up against. I am not compromising. We might get a position that is not my own, but these are my positions as a parliamentarian,” Leacock said.

6 replies on “‘People are firing bullets at us,’ opposition MP says”