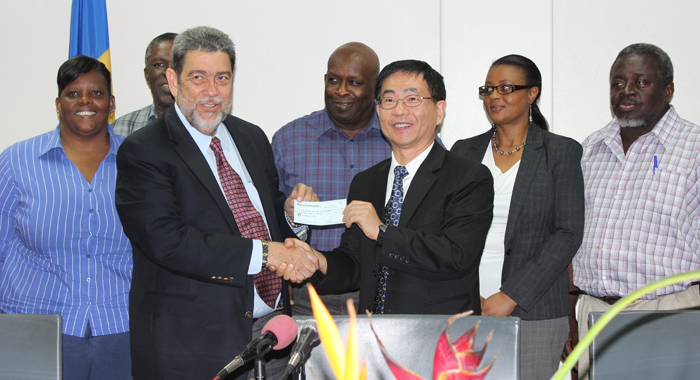 Taiwan is supporting the efforts of St. Vincent and the Grenadines (SVG) to prepare for the possible arrival of the deadly Ebola virus.

On Tuesday, Taiwan’s ambassador to SVG, Baushusan Ger presented a cheque of US$100,000 to Prime Minister Ralph Gonsalves with the aim of enhancing SVG’s capacity to fight the virus, the latest outbreak of which has claimed more than 6,000 lives, mostly in West Africa.

In response to SVG’s urgent need to preventing the possible threat of Ebola as the tourist season has begun, the Taiwan government provided the fund to SVG for procuring personal protective equipment (PPE) kits and a medical waste incinerator through the Pan American Health Organization (PAHO) procurement facility.

Earlier this month, Taiwan gave the U.S. Centers for Disease Control and Prevention (CDC) a cash donation to help meet the most urgent, on-the-ground needs in West Africa.

As part of the efforts to join the international response to combat the disease, Taiwan also donated medical protective gear last November to help fight the Ebola virus in West Africa through a cooperative programme with the United States and other organisations.