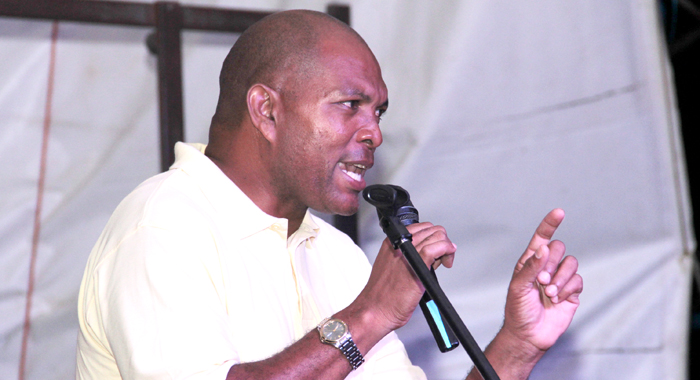 Prime Minister Ralph Gonsalves has questioned the failure of the Traffic Department to realise that Member of Parliament for South Leeward, Nigel “Nature” Stephenson had been driving an unlicensed vehicle for years.

“I really don’t know why the Traffic Department has not picked up on this and that is a matter which the head of Traffic and the Commissioner of Police will have to indicate,” Gonsalves told reporters at a press conference on Monday.

Stephenson told I-Witness News on Friday that he obtained the vehicle from a used car dealer in 2009 and was paying for it over time.

He said he had problems renewing the licence in 2010 because the dealer did not provide him with the relevant documents.

The situation came to the fore in December when Minister of Transport, Sen. Julian Francis told Parliament that an opposition lawmaker had not paid a cent for his vehicle licence since 2009.

Francis, however, did not name the lawmaker.

Gonsalves said he did not know whom Francis was referring to when the transport minister spoke in Parliament.

He said Francis spoke, Francis gave him a document with “all the relevant information”.

Responding to questions from journalists at he press conference, Gonsalves said there are persons who ask why he did not report the matter to the police.

“Well, the point of the matter, in relation to a traffic offence and given the fact that he is a member of the parliamentary opposition, I just thought that to have gone to the police and to have said, ‘Why you are not charging this man?’ will look as though I am playing police officer myself in this regard,” said Gonsalves, who is also Minister of National Security and Legal Affairs

Last year, Leader of the Opposition Arnhim Eustace — who is president of the New Democratic Party, of which Stephenson is also a member — failed to notify police when he (Eustace) was told that one of his constituents would be murdered.

The Sion Hill man was killed in Brighton some days later.

Gonsalves said he understood that Stephenson “has admitted and explained what happened” regarding the unlicensed vehicle.

“So I don’t know what will take place.

“All I’d want to know is why is it that somebody could be driving a vehicle for five years and the motor vehicle is not licensed. Why was not that picked up? In other words, I want to know what happens in the system.

“What happens to Mr. Stephenson from a legal standpoint, that’s not my business in that particular case. As I said, I make a distinction between that and if there was an allegation of a different kind,” Gonsalves told reporters.

Gonsalves, who is also a lawyer, said that under the Motor Vehicle and Road Traffic Act, the penalty for driving a motor vehicle without a licence ranges from EC$250 to EC$2,000.

He said that for that offence, there is no specific alternative imprisonment provision.

However, there is a general provision in the criminal code where a schedule which says if the fine is of a certain quantum, it equates to a certain period of time in prison, ranging from seven days to six months.

Gonsalves said that the offence which attracts a more severe treatment in the law and in the court is driving a vehicle without insurance, a point that a legal expert made to I-Witness News on Monday.

The penalty for driving a vehicle without insurance is up to EC$5,000 or six months in prison, he said.

Gonsalves said that after Francis presented him with the documents about Stephenson’s unlicensed vehicle, he (Gonsalves) told Eustace about the information that he had received.