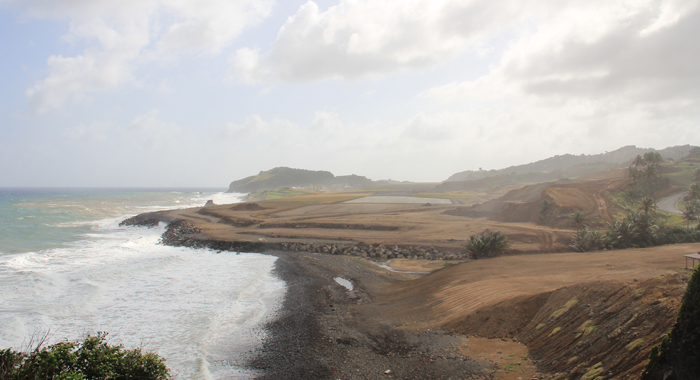 Argyle International Airport, seen from the northern end of the runway, on Jan. 1, 2015. (IWN photo)

At some point during 2014, three years after construction of the Argyle International Airport was originally slated to have been completed, the term “substantially complete” came into use by the people in charge of the enterprise. Now, it’s all we hear. In response to my critique of the enterprise published in September 2014, Dr Rudy Matthias, chairman and CEO asserted that the “IADC, as project manager is doing all in its power to deliver to the Government and People of St. Vincent and the Grenadines an international airport at Argyle, which would be substantially complete by December 2014, and would, God’s willing, become operational by mid 2015.” The emphasis in the quote is mine.

That message was repeated early in November 2014 when Dr Matthias reiterated the “solemn pledge of trying to complete this Argyle International Airport substantially by the end of this year, so that we can begin operations. And truly, we want to begin operations, by mid next year” he said.

Related: Short Stories Worth Telling, Episode 1: How much rain actually fell during July to October this year (2014)?

Substantial completion simply means that the thing you are building has reached a stage of completion where it can be put to the basic use for which it is intended. If you are building a house (ie: a dwelling for one or more persons), the house is substantially complete when the roof is on and windows and doors are in place to provide shelter and security; when basic finishing has been applied and when amenities such as plumbing fixtures and so on are in place. The structure may be unpainted and there may be things missing here and there — but at this point, someone can live in the house in a reasonably safe and secure fashion. It can be considered substantially complete.

When is an international airport substantially complete? The purpose of the facility is to allow passenger aircraft of a certain size and type to land; to disembark arriving passengers and to collect passengers for an outward trip, through a controlled process. Therefore, the facility cannot be substantially complete if, say, the runway has not yet been constructed. That would be like a house without a roof.

So here’s the situation at Argyle.

Figure 1 below shows an image (the original was retrieved from the IADC’s website) which is an official IADC rendering of what the finished airport site should look like, if viewed from directly above.

That horizontal grey strip with the bits sticking out above the horizontal and at the ends is the proposed runway; the complete grey area is the pavement (comprised of runway, aprons, taxiways and turning heads). Note that the above rendering should (but doesn’t) show the commercial, general and cargo aprons in grey.

Figure 2 below shows an aerial photograph of the site, taken on 28th December 2014, with an artist’s rendering of the pavement superimposed.

(The photo is actually two photos taken seconds apart and subsequently stitched together). It’s basically an image put together to show approximately what the site should look like on substantial completion.

And figure 3 below shows what the site actually looked like on 28th December, 2014.

The commercial apron (the light-coloured rectangle directly in front of the blue-roofed terminal building) is substantially complete, as is the turning head (the light-coloured polygon) at the northern end. But, as we can clearly see, the general aviation apron, the cargo apron, the taxiways, the southern turning head and the entire runway are missing. These bits represent about 85% of the pavement (yes, I did a rough calculation) so only about 15 percent of the pavement works had been completed by the end of 2014.

It should go without saying (but I’ll say it anyway, just in case) that 15 percent of anything hardly constitutes substantial, far less complete. And bear in mind that the work on the pavement started in September 2013, so the 15 percent of the pavement you see above has taken about 15 months to build. If future work were to proceed at the same rate, we could expect the pavement works to be completed in about another 7 years, with substantial completion in 2022 or thereabouts (assuming that other necessary elements are completed as well). That’s a long way from now, so one hopes that the folks in charge can speed things up.

But look again at figure 3. It speaks for itself — and it speaks volumes, when taken in the context of the confident assertions made just over two months ago, by the people running the show. Essentially, what the CEO of the IADC advised us in November 2014 was that, despite the fact that it took them 15 months to complete about 15 percent of the pavement works, no problem! The remaining 85 percent would be done in two months!

This is yet another clear illustration of the absurd state of affairs that is the enterprise to build an international airport at Argyle — and it indicates that the people running the show either (a) have no idea what they are doing and therefore saying, or (b) are deliberately lying to Vincentians. Which is worse? Or is it both?

Now, some proponents of the undertaking will doubtless rebut the above with “so what if the airport finishes how many years late? At least it was started, and it will be finished” (several commentators have already said essentially this on Facebook). So, ok — let’s ignore the hugely important fact that a publicly-funded undertaking of unprecedented size and cost, originally scheduled to be completed in 3 years, is now into its 7th year with no credible end in sight, and let’s assume for the sake of argument that it will get finished at some point. Two important questions are still raised. The first is: will the facility have been built to spec? In other words, will the finally-constructed international airport facility meet the various international technical and operational specifications that it must meet to be certified as such? I guess we’ll have to wait until actual completion for the answer to that question. But, assuming it will meet the requirements, the second question is: which airlines will be flying to Argyle when it is operational? Hold the cold Ju-C and hot tri-tri cakes, that’s another story.