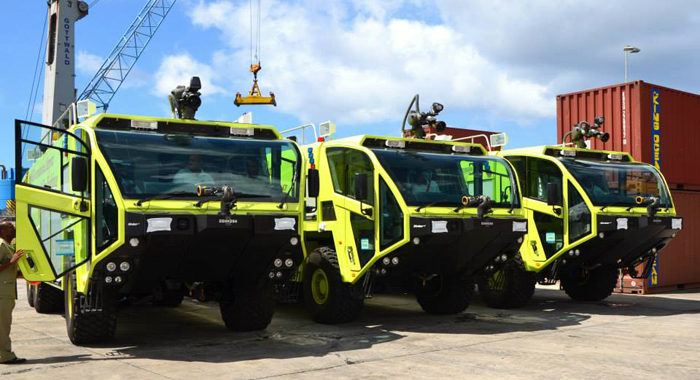 None of the three brand new fire trucks were used to help fight the blaze in Kingstown. (Photo: Lance Neverson/Facebook)

“The entire staff at Argyle is all committed and join together in this solemn pledge of trying to complete this Argyle International Airport substantially by the end of this year, so that we can begin operations. And truly, we want to begin operations, by mid next year,” head of the IADC Rudolph Matthias said on Monday.

He was speaking at an event in Campden Park where Prime Minister Ralph Gonsalves inspected the three aircraft rescue and fire fighting vehicles purchased for the airport.

Matthias said that the fire trucks are the first pieces of equipment that the IADC has bought “to help us realise that dream” of substantially completing the airport by year-end.

Construction on the EC$700 million project began in 2008, and the nation’s first international airport has missed several completion deadlines.

Matthias said that the IADC, a state-owned company, was hoping to open the airport by the end of this year.

“But, as you know, with large projects of this kind, delays are inevitable,” he said.

“We are still working towards substantial completion of the airport project by the end of this year,” he told the gathering, which also Members of Parliament and Cabinet, and officials from the Ministry of National Security.

He noted that the pavement works began in July, adding, “and we are making very good progress.

“The rain that came in the months of July, August, and September, and October too, affected us somewhat, so that the rate of progress of the pavement work was not as good as we would have liked it to be,” Matthias said.

He said the IADC is “on track” to complete the commercial apron pavement works and the turning head at the northern end of the runway this year.

“And when we finish that, that will be 60 per cent of the concrete pavement works that we have to do,” he said, adding that pavement of the rest of the general aviation apron will commence, while the IADC tries to pave the turning head at the southern end of the runway at the same time.

The IADC is hoping to start paving the rest of the runway later this month.

Matthias pointed out that the runway will be paved in asphalt, and said that the IADC has all the equipment it needs for that exercise.

“It has been there for sometime, but we wanted to have the concrete pavement works going smoothly first, before we start the asphalt on the runway,” he explained.

“And that work will go into the first quarter of next year,” Mathias said.

‘on track’ for substantial completion

“So, we are on track when I say we are going to be substantially complete by December. Substantial completion doesn’t mean total completion. It means that more than 95 per cent of the work that we have to do on construction of the airport will have been finished by the end of this year.”

He said the main job on the earth and site works that remains to be done is channelling the Yambou River under the runway.

The channel through which the river will run under the runway, is already excavated, and the pouring of concrete will begin this week, Matthias said.

He said work on diverting the river was affected by shortage of equipment at the side, where there are 95 pieces of heavy equipment.

“Ninety-five pieces — and we are still short. So, sometimes you are not able to go at the rate that you would like to go,” he said, adding that IADC has been renting equipment from private contractors to make up for the shortfall.

Matthias said the buildings at the airport are “progressing” and that the control tower is “almost done”, and will be handed over this month.

While the airport will miss the 2014 target date for beginning to receive flights, Matthias said that the IADC had done several things to meet that deadline, including buying the fire trucks and scheduling to have them shipped to St. Vincent at this time.

“So, the trucks appear to be early, but not early, because our previous schedule was to have them here for the airport to begin operation in December of this year,” he explained.

He said the trucks will be stored at E.T. Joshua Airport in Arnos Vale, until Argyle is ready to receive them.

Matthias said that the fire station at Argyle is “substantially advanced” and will be handed over this month.

“Indeed, in principle, we can park these equipment out there at Argyle. But that will require the police to come there maybe two or three days a week to start them up and to keep them going. To we have opted to keep them at Arnos Vale, which is far more accessible to them,” he explained.

The terminal building was handed over to the IADC last December and Matthias said the company is in the process of buying several pieces of equipment for the operational stage of the airport.

Matthias said that some project are conceptualise so that the state does the construction and the other agencies of government, like the police and immigration departments and airport operator, buy the equipment that they need to operate the airport.

He, however, said that since the IADC is government owned, it is spearheading all of those activities.

He said that in the coming months, the IADC will be buying other equipment for the terminal building, the biggest of which will be two jet bridges.

Other equipment to be purchased, including conveyor belts, counters, and scanners.

Cargo terminal yet to be built

He further said the IADC is in conversation with two firms that have expressed interest in financing, constructing and operating the cargo terminal.

“The operation of a cargo terminal is a business, so we want to have the private sector involved in that aspect of our work, so that they will design, finance, construct and operate it. And we are hoping that we have this contract signed by January, or February, latest, next year,” he said, adding that construction of the cargo terminal should take three to four months.

He said the cargo terminal will be a small, mainly steel structure.

“In any event, if no private firm builds it, then IADC will build the small cargo terminal,” Matthias said.

He said IADC has leased four parcels of land to three firms to build hangars, and one of those companies has begun to design the structures.

Meanwhile, Prime Minister Ralph Gonsalves said at the event that he is pleased with the fire trucks.

He said the three trucks each has a capacity of 3,300 gallons of water, 460 gallons of AFFP/FFFP concentrate and 550 pounds of dry chemical.

In addition to the trucks, there was a container load of spare parts for a year, and supplementary equipment, he said, adding that the purchases cost US$2.7 million.