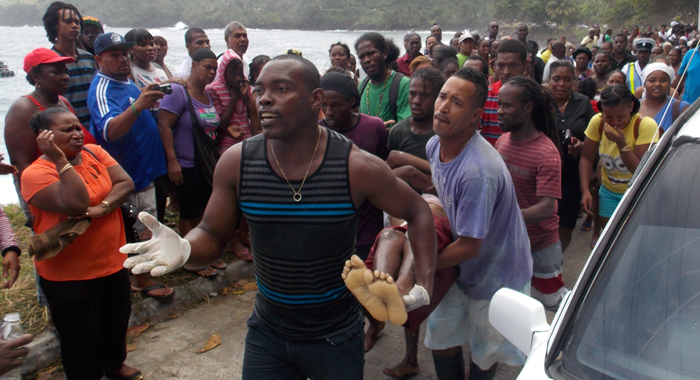 Men carry the body of a female studentsafter it was recovered from the sea on Monday. (IWN photo)

The Ministry of Health said late Monday afternoon that it can verify that five persons are dead as a result of the incident in which a minibus plunged into the seas at Rock Gutter, a community between Owia and Fancy in north-eastern St. Vincent Monday morning.

Earlier tallies, based on police and other government sources, suggested that seven persons had been confirmed dead.

Neeka Anderson-Isaacs, health communications and promotions officer in the Ministry of Health Wellness and the Environment, said that two persons are missing and 10 are hospitalised at Milton Cato Memorial Hospital (MCMH) and four at the hospital in Georgetown.

The ministry said that approximately 21 passengers, 14 of whom are said to be students, were in the bus when the incident occurred.

“Fifteen persons were initially seen at the Owia Clinic, where one was confirmed dead.

“The driver, who is alive and is himself nursing injuries, reportedly assisted in the rescue efforts,” Anderson-Isaacs said.

The communications officer said that the Ministry has activated its mass casualty management plan.

Adjustments were made at MCMH — the nation’s main health care facility — to accommodate the emergency.

“The Accident and Emergency unit was transformed to accommodate injured persons as well as to provide counselling for family members.

“Additionally the Ministry sent two ambulances from Kingstown with staff nurses and emergency medical supplies to augment the staff deployed from the Georgetown hospital and the mental health facility in Orange Hill to assist in the emergency management process,” Anderson-Isaacs said.

She said the Ministry was still in the process of managing patients being housed at the Georgetown hospital as well as at the MCMH.

The Chief Medical Officer said that as part of the mass casualty management plan, MCMH is treating the injured, and that the psycho-social emergency team is working as part of that management plan and will continue in the days to come to provide the anticipated support which will be needed.

Keizer-Beache further thanked members of the public who assisted before health care staff arrived and further extended prayers and sympathies to the family members affected by the incident.

Additionally she thanked the staff of the ministry of health “for their tremendous efforts today”.

The Permanent secretary said he is saddened by the tragedy but is thankful that the professionals were able to activate the ministry’s mass casualty management plan.

He thanked all of ministry staff for their quick and ready response in this regard, saying he is heartened by the assurances of sympathy and support given by international partners, particularly the Pan-American Health Organisation.

de Shong said he is pleased with the level of collaboration between his ministry and the Ministry of Education with respect to the delivery of psychosocial support.

“I give my own personal condolences to the families of those who perished in this tragedy and wish a speedy recovery to those who have been injured,” the official said.

Meanwhile, Burgin said Monday’s event is “a sad occasion for the people of St. Vincent and the Grenadines and more so for the families of the persons involved in the accident”.

He said he bears the pain of those who are suffering at the moment and extends prayers and condolences to those who have lost loved ones.

The minister further wished speedy recovery to those who have been injured and said he hopes that   they find solace in the fact that the entire country is praying for them.

He health officials are doing all they can to assist those suffering at this time.