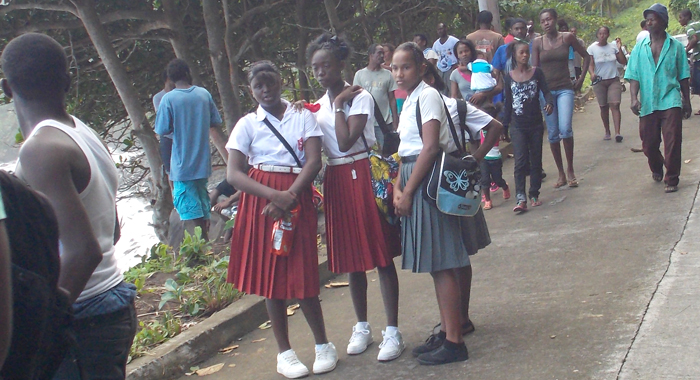 Secondary school students and other onlookers at the scene in Rock Gutter on Monday. (IWN photo)

A number of students collapsed at North Union Secondary School Monday morning when news broke that a van containing several of their schoolmates had plunged into the sea in North Windward killing several persons, while others remained missing.

“It was a very solemn mood this morning,” St. Clair Da Santos, principal of North Union Secondary School, told reporters in Rock Gutter, an area along the road between Fancy and Owia, where the tragedy occurred.

In the latest update Monday evening, officials said five persons have been confirmed dead, two are missing and 10 were hospitalised as a result of the accident.

“… about a hundred students collapsed when they got the news,” Da Santos told reporters.

“They are always mannerly, well dressed, and they always reach to school after 6 [a.m.]. In fact, they are the first group of students who I normally interact with on a morning. And this morning when I reached to school I actually went and looked for them, because I interact with them regularly,” he said.

“In fact, on Friday, one of the students who died, Jamali Edwards, he was one of the top science students… and I asked him, ‘Do you have a remote control that normally spit shoe cleaning, hair grease and stuff to clean your clothes, because of the way you normally dress neatly?’

“In fact, we have 14 students from the school who normally travel on that vehicle on a regular basis. I think we have three confirmed [dead] and one missing so far; the others are gone to the hospital,” Da Santos said.

“The teachers cannot cope with it. Even the counsellor at our school, you know, really cannot handle the situation; it is really tough at the moment,” he said. “Really tough,” he added after a pause.

Officials are yet to release the name of the dead and missing, but have said that approximately 21 passengers, including 14 students, were on the bus.

Meanwhile, Deputy Prime Minister and Minister of Education Girlyn Miguel, at the time of addressing reporters, said that officials were still trying to gather the facts.

“But what do we say when disaster strikes? We have to comfort one another, we have to say be of good cheer. We have to remember that we are a people under God.

“We are a people who must remember that what he (God) did not allow he will disallow, and today we know that he loves the children of our state, but we have to have faith in him to know that he will revive us again, even though he would have called them home to him.

In response to the tragedy, the Accident and Emergency Department at Milton Cato Memorial Hospital in Kingstown was transformed, to accommodate injured persons as well as to provide counselling for family members.

Chief Medical Officer Dr. Simone Keizer-Beache said Monday that as part of the mass casualty management plan the hospital is treating those persons who were injured, and that the psycho-social emergency team is working as part of that management plan and will continue in the days to come to provide the anticipated support which will be needed.