Mountain of mud in the middle of Argyle airport runway 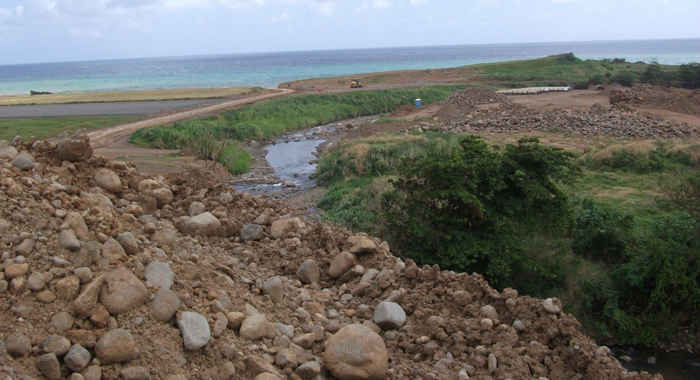 If anyone tells you that aircraft will land at Argyle in 2015, then that person is lying to you. The middle of the Argyle airport runway is a river and a muddy wasteland. The Argyle airport will take at least four more years, and even then, it will not be a functioning airport.

Since 2006, we have been bombarded with ULP regime nonsense about how the Argyle airport will boost the economy, but the reality is Argyle has been a curse to our country. Throughout SVG, towns, villages and communities have been starved of jobs and money, all for the sake of building Argyle airport for tourists.

From Fancy to Fitzhughes, Union Island and beyond, the needs of Vincentians have been ignored. Hospitals have fallen to ruin, the economy is virtually dead and the country is littered with tombs that once used to be flourishing businesses. The consequence has been high unemployment, high crime, destitution and poverty.

Vincentians have been made to suffer under the economic delusion that tourism and the Argyle Airport will bring prosperity. Well, they will not.

Having an airport does not guarantee prosperity. Barbados has had an international airport since 1938 and tourism for over 60 years, yet Barbados laid-off 3,000 government workers in 2013 and rolled out yet another national poverty alleviation programme a few years previous.

The Yambou River is yet to be culverted; there is a mountain of mud in the middle of the runway area; the northern end of the runway is just mud and is being washed away by the sea; and, the cliff at Peruvian Vale village impedes final approach to the runway and will need to be knocked down and cleared away (See more photos taken in December 2014 here).

After that, the runway will need to be compacted properly over a number of years, otherwise it will simply break up under the weight of 400-tonne jumbo jets and 590-tonne Airbus planes.

Over 700 million dollars have been wasted at Argyle and the result has been a muddy disaster. Both the financially incompetent Unity Labour Party and New Democratic Party regimes seem intent on wasting millions of dollars more on Argyle. The SVG economy is at real risk of collapsing, because so much money has been wasted at Argyle.

SVG needs change to save the economy and create thousands of new jobs for our people. It is clear that the mountain of mud at Argyle will not resemble an airport before the year 2020. It is a joke to suggest planes will land at Argyle when the runway has a river running through it.

A Green government will put the needs of Vincentians first, not tourists, and immediately abort the Argyle airport fiasco. It is unfair to make our people wait another four years for jobs and cheaper electricity and water. They have been waiting since 2006 for jobs and prosperity, but the ULP regime has failed them.

Vote Green Party to abort Argyle, and instead, create a strong economy and thousands of new jobs.