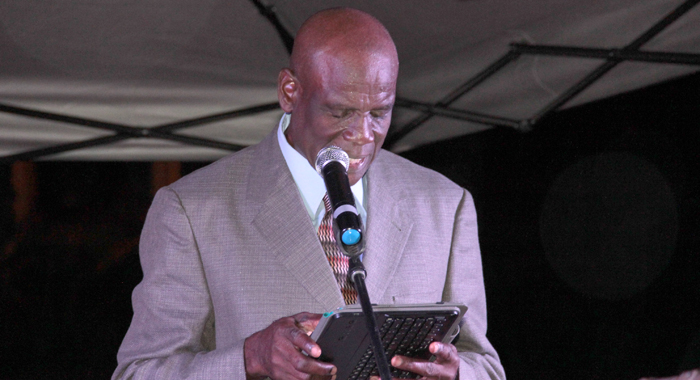 A religious leader says the Human Rights Association filled the shoes of the church when it organised the peace rally on Sunday to pray for healing after the death of political activist Edgar Cruickshank at a New Democratic Party meeting in Clare Valley on Dec. 6.

Cruickshank, a former Unity Labour Party council member in South Leeward who last year switch support the NDP, the main opposition party, died when a car crashed into an NDP meeting in the South Leeward community.

Police have brought several charges againstAntwone “Quincy” Anthony, the driver of the car, which was unlicensed and uninsured.

“But, sadly, sometimes tragedy seems to be the one that does the most pulling together and the cementing of our people whenever, and wherever we are.”

He spoke of the trough system in St. Vincent in December 2013, which claimed 12 persons, saying that the tragedy brought Vincentians together “admirably and purposefully”.

“… on Saturday Dec. 6th, 2014 the tragedy which, unfortunately, took the life of Mr. Edgar Cruickshank, a father and former cricketer, was very sad indeed,” Nelson said, and noted that other persons where severely injured.

“And this serious situation demanded that we come together as a people, so we can — by God’s help — heal and not hurt ourselves further,” he said.

“There is the proclivity or the high tendency for hurting people to hurt people. In other words, hurt people hurt people. Therefore, this is precisely why I want to commend and applaud the St. Vincent and the Grenadines Human Rights organisation for pulling together the nation for the healing of our people at this critical juncture in our history,” Nelson said.

“The human rights organisation got it right this time. They are doing what I think the established church should have done in a situation like this.

“And Mr. Edgar Cruickshank, if I know him very well, would like nothing less than us to come together today for the purpose of making peace with each other. He would have said ‘blessed are the peacemakers for they shall be called the sons of God’,” Nelson said.

He said that Vincentians “as a people, must forgive, must forget, must forge forward like mighty rivers, cleansing and cleaning our mind of all emotional, unwanted negativity that persists and have attached themselves to our personal history and development.

“We, my brothers and sisters, must make the first step towards our healing and reconciliation. In most situations, it is not who is right and who is wrong, but rather, it is what is the right thing to do in a situation. One must ask themselves the searching question ‘Am I healing the hurting or am I hindering others’ progress?’” Nelson told the rally.

Several other religious leaders, including pastors Noel Clarke and Lemuel Samuel addressed and prayed for the nation at the rally.

Kay Bacchus-Browne, head of the local chapter of the Universal Peace Federation and former president of the HRA, commended the HRA for taking initiative to hold prayer and peace rally.

She said prayer and peace rallies have been held in St. Vincent and the Grenadines for decades by non-religious groups and organisation.

Bacchus-Browne, a lawyer, pointed out that in 1996, she and Dawn Bacchus Thomas called the nation to a national day of prayer on July 26 at Victoria Park.

On Oct. 21, 2011, the Universal Peace Federation held a peace rally at the Calliaqua Playing field, and the government was represented by Minister of National Reconciliation, Maxwell Charles, while Leader of the Opposition Arnhim Eustace represented the opposition, she said.

The governing Unity Labour Party did not send a representative to the rally, saying it should have been organized by the church.
The main opposition New Democratic Party was represented by Vice-President and MP for Central Kingstown, St. Clair Leacock, while leader of the fledgling Democratic Republican Party, Anesia Baptiste, spoke on behalf of her party.