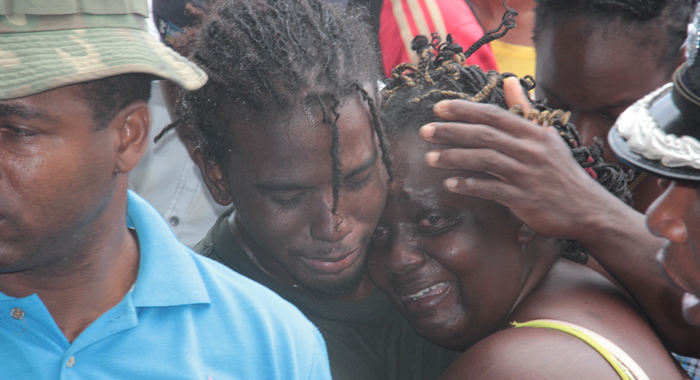 Relatives of one of the victims console each other at the scene on Monday.

The community of Fancy in north-eastern St. Vincent is preparing to bury the five students who died when a minibus plunged into the sea at Rock Gutter on Monday.

Meanwhile, the government says it will continue the search for two students who are missing at sea as a result of the accident.

“We will persist in this exercise until we find them, or until the professionals, in consultation with the families, consider otherwise,” Prime Minister Ralph Gonsalves said on radio on Thursday in his latest address to the nation since the tragedy.

Gonsalves said the families of the dead students have asked for a single funeral and burial ceremony, which has been tentatively set for Sunday, Jan. 25th at the Fancy Hardcourt.

The Cabinet Secretary has been communicating with the families, new Haven Funeral Home, and all other interested person on the funeral arrangements.

Gonsalves said that the students might be buried at a new cemetery in Fancy, if the requisite legal and procedural formalities are completed in time.

He said he has been in communication with the grieving families, the survivors and the community and attended the “Third Night” observance at the Fancy Government School on Wednesday.

At the observance, the community accepted the suggestion that a national day of mourning not be declared until the two missing students are found or the search and rescue operation called off, Gonsalves said.

Flag began flying at half-mast on Wednesday and this will continue until further notice, Gonsalves said.

At the gathering, the site for a new ceremony in Fancy was selected, Gonsalves said. “All the requisite formal and procedural arrangements are being made to give practical effect to this selection and to have the site consecrated, hopefully prior to the funeral on Sunday January 25th.”

The Prime Minister said that on behalf of the government, he made to the gathering “several solemn commitments to the families of all the students who were in the minibus and to the surviving students in respect to their care, comfort and education right up the university level.

“I will announce these measures in Parliament shortly, at the appropriate time,” Gonsalves said, adding that his government will spare no effort or expense in respect of the medical treatment in St. Vincent and the Grenadines or abroad of the survivors of the incident.

“Our entire nation is so happy that they are alive and is so anxious, we are quite anxious to see them restored to full health as soon as practicable,” he said.

Gonsalves said arrangements are being made in respect of a replacement school bus to transport students from Fancy.

It is expected that a replacement school bus on an interim basis will be on the road from Monday Jan. 19.

The government, however, is ordering a school bus for permanent operation, which will be managed through the Ministry of Transport, and expects to have the new school bus operating in shortest possible time, Gonsalves said.

In the wake of the tragedy, the presentation of the 2015 Budget, which was originally scheduled for last Monday, has been postponed until Jan. 28.

Gonsalves said that the Budget is expected to be enacted within the constitutional timeframe.