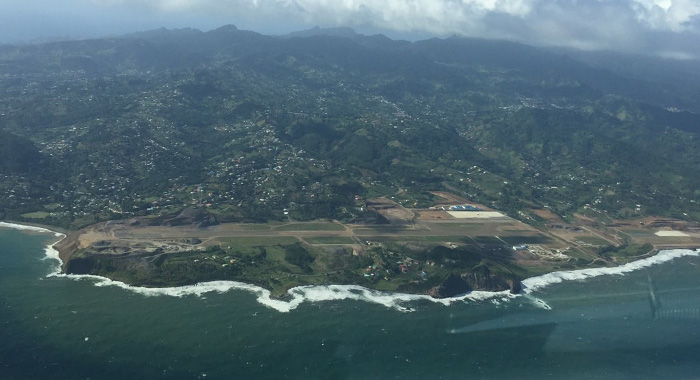 Though it was originally designed as a multi-purpose airport, today it is mainly used for cargo flights. The former passenger terminal apron is now a racing course.

Mirabel was intended to replace the existing Dorval Airport as the eastern air gateway to Canada. Accordingly, from 1975 to 1997, all international flights to/from Montreal were required to use Mirabel. However, Mirabel’s distant location, the lack of adequate transport links to urban centres and the continued operation of domestic flights from Dorval Airport made Mirabel very unpopular with travellers and airlines. This fact, coupled with Montreal’s economic decline relative to Toronto, kept passenger volumes from rising to the levels originally anticipated. Passenger volumes remained lower than what Dorval Airport could handle when renovated and when the decision was finally made to consolidate passenger traffic at one airport, Dorval was chosen, and Mirabel was relegated to the role of a cargo airport. Mirabel thus turned out to be a white elephant. Ironically, Dorval Airport was renamed (to Montreal–Pierre Elliott Trudeau International Airport) after the fiscally-challenged Canadian Prime Minister whose government initiated the poorly-conceived project whose ultimate aim was to close and replace that same airport!

In the 1960s, Montreal experienced a tremendous economic boom. Massive construction projects brought the city international status. More and more visitors were arriving to the city, especially by airplane, though not always by choice. The federal government required that European airlines make Montreal their only Canadian destination. This resulted in 15–20 per cent annual growth in passenger traffic at the city’s Dorval Airport. Optimistic about the city’s future and its continuing ability to attract more and more visitors, government officials decided to build a new airport that would be more than able to absorb increased passenger traffic well into the 21st century.

In March 1969, the federal and provincial government reached an agreement to locate at the present site and proposals were drawn up to expropriate 97,000 acres, an area larger than the entire city of Montreal. It is served only by a long road link via Autoroute 15 and Autoroute 50. An additional link via Autoroute 13 was planned but never completed. Also planned was the connection of Autoroute 50 to the Ottawa/Gatineau area, a goal which would not be achieved until decades later, in 2012.

The federal government expropriation resulted in making Mirabel the world’s largest airport by property area. The airport’s operations zone, which encompassed what was eventually built plus expansion room, amounted to only 17,000 acres, about 19 per cent of the total area of the airport. The federal government planned to use the excess land as a noise buffer and as an industrial development zone (which was never started). This attracted the ire of the surrounding people who protested vehemently against the expropriation of their land. Nevertheless, construction started in June 1970 under the auspices of BANAIM, a government organisation formed to build the airport.

High-speed rail transit was intended to be completed at a later date. However, it never got beyond the drawing board. The federal, provincial, and municipal governments never managed to find enough cash to fund the highly ambitious and expensive rapid transit project. Thus, Mirabel was forced to cope with an inadequate road system and non-existent rail transit, supplemented only by express buses.

Montréal–Mirabel International Airport opened for business October 1975, in time for the 1976 Summer Olympics.

After 1976, Mirabel and Dorval began to decline in importance due to the increasing use in the 1980s of longer-range jets that did not need to refuel in Montreal before crossing the Atlantic. The use of longer-range aircraft was made more attractive by the C$716 million expansion of Dorval from 2000–2005 gave it the ability to serve 20 million passengers a year, ironically accomplishing one of the goals that was to be met with the construction of Mirabel. (In the 1970s, the federal government projected that 20 million passengers would be passing through Montreal’s airports annually by 1985, with 17 million through Mirabel). Aéroports de Montréal financed all of these improvements itself, with no government grants. The result was that Mirabel became redundant. Only Air Transat held out until the very end when the last commercial flight using Mirabel departed to Paris in October 2004.

To ensure Mirabel’s survival, all international flights for Montreal were banned from Dorval from 1975 to 1997. However, public pressure in support of Dorval prevented its planned closure, yet Dorval’s continued existence made Mirabel comparatively expensive and unattractive to airlines and travellers alike.

The C$716 million expansion of Dorval from 2000–2005 gave it the ability to serve 20 million passengers a year, ironically accomplishing one of the goals that was to be met with the construction of Mirabel. (In the 1970s, the federal government projected that 20 million passengers would be passing through Montreal’s airports annually by 1985, with 17 million through Mirabel). Aéroports de Montréal financed all of these improvements itself, with no government grants.

Today, Montréal–Mirabel International Airport is used almost exclusively for cargo flights, with passenger operations having ceased in 2004, twenty-nine years after the airport’s opening and many years of limited, primarily charter service.

With little or no airline service, and with many empty spaces inside its terminal, Mirabel has been the setting of several movies, TV series, and commercials for many years. The movie “The Terminal” features the mezzanine overlooking the immigration desks and the baggage carousels directly behind them, the tarmac and the main terminal entrance.

In December 2006, in a move he called “correcting a historical injustice,” Prime Minister Stephen Harper announced the return of thousands of acres of farmland expropriated to build Mirabel airport. About 125 farmers, who rent their land from the federal government, were permitted to buy it back. Harper said he was pleased to finish the work started by former prime minister, Brian Mulroney, who unlocked a major parcel of expropriated land during his first term in office in 1985.

In May 2007, it was reported that the International Center of Advanced Racing had signed a 25-year lease with Aéroports de Montréal to use part of the airport as a race track.

Starting in 2011 the NASCAR Canadian Tire Series, Drag racing and other forms of Motorsport began running on the airport’s runways and surrounding areas, on what is known as Circuit ICAR.

In May 2014, Aeroports de Montreal confirmed that the current terminal building will be demolished, citing its high maintenance cost as a reason, in light of the fact its facilities are unfit for current commercial aviation needs and lack any economic viability.

There are many similarities and some important differences between the conception, planning, financing, and operation of Mirabel and AIA.

Mirabel was rooted in real increases in economic growth and associated air traffic; Argyle was not. Air traffic to and from E.T. Joshua Airport has been stagnant at best in recent years. There is no pressing need for new airport in SVG, just as there was no pressing need for a new airport at Mirabel had the federal Canadian government allowed European airlines to land at other Canadian airports and had the Quebec and Canadian governments simply expanded the existing Dorval airport, as was successfully done many years later.

Mirabel was conceived based on plans for abundant and speedy transit to and from the airport from adjacent areas, particularly Montreal. This did not happen because of the factors outlined above. But at least there was planning for rapid and other transit. As far as I know, there have been no plans suggested, let alone put in place, for transporting the hundreds, if no thousands, of passengers expected to arrive and depart from AIA every day. I guess the reasoning is that “if you build it, they will find a way to go and come”.

Mirabel was largely or fully built using existing government taxation and other resources. Hence, its white elephant status could be absorbed, albeit with considerable pain, by one of the richest countries in the world. A poor country like SVG can ill afford such an economic blunder: a white elephant at Argyle will plunge us into a financial abyss that will take decades to climb out of.

Predicting economic development and continued fiscal growth are foolhardy exercises. Who but a few outlier economists would have suggested, just a few months ago, that oil prices would have fallen off a cliff so fast? Who could have predicted that Montreal would have gone into decline so quickly or that new technologies and the other factors mentioned above would make Mirabel redundant? Who, besides our prescient Prime Minister, Dr. Ralph Gonsalves, has the knowledge of things to come to predict that AIA will be our economic saviour?

It is clear, at least to me, that if and when a new airport is ever built at Argyle, whatever political party is in power will prohibit flights to and from Arnos Vale in the same way the Quebec government tried to prohibit passenger flights to Mirabel and with the same anti-competition results. Even LIAT, partially owned by SVG, will complain about the much higher landing and other fees at Argyle as will the cohort of scheduled and charter airline servicing the Grenadines. But it will be impossible to support two airports on the mainland, both of them money-losers. AIA will “win,” at least in the short run.

There are other similarities between Mirabel and Argyle such as the forced government expropriation of farm properties, which readers can discover for themselves.

But there is a fundamental difference between the Mirabel mistake and the Argyle fiasco besides the fact that a country the size and wealth of Canada can absorb even major government policy errors: Mirabel was planned and operated as a multi-purpose airport for cargo, in-transit passengers, business people, in-country travellers, and international tourists. All these categories of cargo and people were expanding greatly in the years leading up to the completion of the airport. AIA, on the other hand, is not based on any substantial increase in these categories. And, as far as cargo is concerned, nearly all hard goods that are now brought in by ship will continue to be brought in by ship. The same holds true for perishable products — fruit, vegetables, meat, and fish — which now easily and cheaply arrive in refrigerated containers. If new export markets are found for indigenous fruit, vegetables, etc., the same refrigerated containers transported as usual by ship will be used.

As for in-transit travellers, they are already fully serviced by existing airports while international Vincentian flyers or visitors will continue to travel in the same numbers regardless of whether a new airport is every completed at Argyle.

This leaves the category of people for whom the airport is actually being built, or claimed to be being built: international tourists. And it is this category of people which is most problematic and most risky, given the large and growing number of tourist-friendly destinations they can choose from and the inherent volatility of the hospitality industry.

With so many different categories of cargo and people to count on, Mirabel still turned out to be a white elephant. With only one category of visitor to depend on, with no economic boom even on the distant horizon, with almost all our present tourism and future tourist growth lying in the Grenadines, and with no influx of monied visitors vying to come to the mainland, are we not building another Mirabel at Argyle?

And don’t count on AIA’s conversion to a racetrack years down the road: the last time I checked, SVG doesn’t have any racehorses.